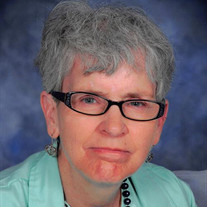 Gloria Ann was born in Denison, Iowa on January 26, 1952. She was the fourth of nine children born to James and Marie (Rau) Grote. At the time of her birth, the family lived on a farm near Manilla. Gloria was baptized at Sacred Heart Catholic Church in Manilla. In 1955, the family moved to a farm east of Portsmouth. Gloria attended St. Mary's School and received the sacraments of Reconciliation, Eucharist, and Confirmation at Our Lady of Fatima Church. After her freshman year, Gloria attended the Harlan Community High School where she graduated in 1970. Gloria then went on to attend Commercial Extension Business School in Omaha from 1970 - 1971. On June 10, 1972, Gloria married Jan Randall at Our Lady of Fatima Catholic Church in Portsmouth. Gloria and Jan have one daughter, Christine, born in 1973. When Christine was born, Gloria and Jan lived in Portsmouth. Gloria and Jan divorced when Christine was young. In 1980, Gloria moved to Harlan where she worked for Great Plains Lumber Company. Gloria married Rich Musich in 1983 and they divorced in 1988. Gloria then suffered a disabling stroke in 1990 and after extensive therapy she reentered the work force at CDS in Harlan in 1993. Gloria worked at CDS until she retired. Gloria's favorite pastime was probably spending time outdoors. Having grown up in a farm family with so many girls, she was often needed to help her dad with the farm work. She also loved sports. All that farm work made her strong, so she was a good softball player and an avid bowler. In recent years, Gloria loved walking outside. She could often be seen walking in the neighborhood taking in the fresh air and sunshine. When indoors, Gloria loved doing jigsaw puzzles. She always had a puzzle on her front room table. She also helped with various tasks at St. Michael's Church. Recent years became more of a struggle for Gloria because of continued health challenges. However, she stayed strong and maintained a positive attitude. Gloria died peacefully at Myrtue Memorial Hospital in Harlan on Sept. 11, 2021, attaining the age of sixty-nine years, seven months, and sixteen days. She was preceded in death by her parents and brother Lloyd Grote. She is survived byher daughter Christine (Jammie) Forney of Glenwood, Iowa; grandson Corey Dimon of Omaha, Nebraska; granddaughter Melissa Forney of Springfield, Missouri; siblings Linda (Bill) Anderson of Wheaton, Illinois; Mike (Mary) Grote of Council Bluffs, Iowa; Kathy (Mel) Sporrer of Portsmouth, Iowa; Leona (Dan) Bladt of Shelby, Iowa; Geralyn (Paul) Sachs of St. Augustine, Florida; Marita (Jay) Heiman of Council Bluffs, Iowa; Maxine (Mark) Gaul of Orange City, Iowa; sister-in-law Lee Grote of Omaha, Nebraska; nieces and nephews; other family members and friends. In lieu of flowers, the family suggests memorials to the Shelby County Catholic Schools.

Gloria Ann was born in Denison, Iowa on January 26, 1952. She was the fourth of nine children born to James and Marie (Rau) Grote. At the time of her birth, the family lived on a farm near Manilla. Gloria was baptized at Sacred Heart Catholic... View Obituary & Service Information

The family of Gloria Ann Musich created this Life Tributes page to make it easy to share your memories.

Send flowers to the Musich family.