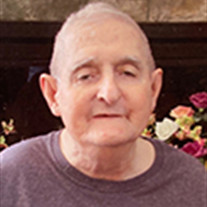 Glenn Lewis Gordon son of Glenn Harold and Marie (Paulson) Gordon was born January 15, 1940 in Atlantic, Iowa. He was baptized in Atlantic at the Baptist Church. Glenn went to Atlantic school through the 6th grade. Glenn was united in marriage to Lois Andersen in July of 1966 at the Altamont Baptist Church in Harlan (Cuppy Grove). They were blessed with four children Terry, Shari, Melinda and Todd. Glenn and Lois remained very good friends even after their separation and continued attending family gatherings together. Glenn worked as a laborer until back injuries forced him to retire. When Glenn was young he loved to go hunting for rabbits along the railroad tracks in Atlantic. He would bring his harvest home to his mom, who would prepare them for the family to eat. He also loved to go fishing. He enjoyed his trips to Okoboji with his family. His kids have great memories of these trips. He enjoyed riding motorcycles. Even though his mom did not like him riding them. When Glenn was an adult married with kids he would still hide the motorcycle from his mom. Glenn enjoyed spending time with his kids. He enjoyed going to Terry’s house when Terry would pick him up from the home to watch movies and spend time with his kids. Glenn loved horror movies, westerns, war movies and action movies. He was a Iowa Hawkeye fan through and through. He followed the Harlan Cyclone football team, unless playing Atlantic then he rooted for them. He loved to collect eagles. He has quite the collection. Glenn loved his pop, 7-up was a cure all. Glenn also was a part of a roller skating team called “The Play Time Rebels”. Glenn lived in Denison, Harlan, Woodbine and Atlantic, but always considered Atlantic his home. Glenn died on April 21, 2022 in Woodbine, Iowa. He was preceded in death by his parents Glenn Harold and Marie Render (Gordon); son-in-law Denver Hansen and 2 brother-in-laws Gerald Johnson and Donald Swanke. He is survived by his children Terry (Karen) Gordon of Harlan, IA; Shari Hansen of Kimballton, IA; Melinda Gordon (Tracy Dickinson) of Harlan, IA and Todd Gordon of Council Bluffs, IA; 5 grandchildren and 3 great-grandchildren. Siblings Darlene Johnson of Gainesville, FL and Jean Swanke of Orlando FL.

Glenn Lewis Gordon son of Glenn Harold and Marie (Paulson) Gordon was born January 15, 1940 in Atlantic, Iowa. He was baptized in Atlantic at the Baptist Church. Glenn went to Atlantic school through the 6th grade. Glenn was united in marriage... View Obituary & Service Information

The family of Glenn "Sonny" Lewis Gordon created this Life Tributes page to make it easy to share your memories.

Send flowers to the Gordon family.