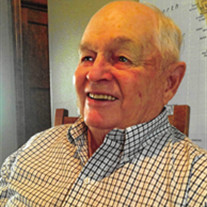 *In lieu of flowers, memorials contributions can be made in Glen's honor to either of the following: First Baptist Church of Kiron Building Fund PO Box 220 Kiron, Iowa 51448 Kiron Fire Department/First Responders PO Box 100 Kiron, Iowa 51448 **Masks are required for the Visitation and the Service** Glen Willard Ballantine, the son of James Jr. and Agnes (Fredrickson) Ballantine, was born on September 29, 1932 in Arion, Iowa. He was a lifelong member of the First Baptist Church in Kiron, serving as a trustee and an usher for many years. As a child Glen was a hired hand for his dad on the farm from age seven. He attended country school up until 8th grade and then transferred to Kiron High School where he graduated in 1950. On December 8, 1951, Glen married his high school sweetheart, Genevieve Wilson at the First Baptist Church in Kiron. They were blessed with two children, Connie and Chuck. They moved to the family farm and began farming together. In 1956, Glen took sole ownership of his family farm and his parents and sister moved to Florida. Glen was a strong man of faith, but in a quiet way. Every day, he and Genevieve did devotions together and they would pray for their family. Each day of his life he spent working side by side with Genevieve. In their spare time they loved traveling to the mountains of Colorado together. For decades Glen was devoted to the farm. Together they raised a cow/calf herd and they loved it. They were very proud of their herd. It was a sad day in 2002, when he sold the last of their cows. Following retirement, Glen still helped out on the farm wherever he was needed. He enjoyed restoring antique tractors and going on tractor rides with his friends. He also enjoyed tractor pulls and was a fan of NASCAR. His favorite driver was Jimmie Johnson. Glen even had a chance to drive a NASCAR car during a NASCAR Driving Experience. On Monday, September 14, 2020, Glen passed away peacefully at Reed Place in Denison at the age of 87 years, 11 months, and 16 days. He was preceded in death by his parents and son Chuck Ballantine. Those left to cherish his memory include his wife Genevieve Ballantine of Kiron, Iowa; daughter Connie and her husband Steve Sawyer of Lenox, Iowa; daughter-in-law Stephanie Ballantine of Kiron, Iowa; grandchildren Tyson Sawyer and his wife Kathryn of Des Moines, Iowa; Alison and her husband Josh Munter of Spencer, Iowa; Devon Sawyer and his wife Danielle of O'Fallon, Missouri; Brooke Ballantine of Inver Grove Heights, Minnesota; Claire and her husband David Leppert of Granada, Spain; Beth and her husband Jarrod Tembreull of Portland, Maine; 6 2/3 great-grandchildren; sister Joyce and her husband Jim Saxon of Ocala, Florida; and other relatives and friends. A funeral service was held on Saturday September 19, 2020 at the First Baptist Church in Kiron, Iowa. Pastor Bruce Kaihoi was the officiant for the service. The congregation joined in singing the hymn “To God be The Glory” accompanied by Sue Kaihoi on piano. A musical recording of “Highland Cathedral” by Amy Grant concluded the service. Josh Blair, Tyson Sawyer, Devon Sawyer, Josh Munter, Fred Coltrain, and Jason Fineran served as casket bears for the service. Following the service, a private family interment was held at Kiron Cemetery in Kiron, Iowa.

The family of Glen Ballantine, created this Life Tributes page to make it easy to share your memories.

*In lieu of flowers, memorials contributions can be made in Glen&#39;s...

Send flowers to the Ballantine family.