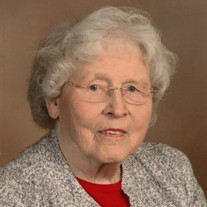 Fay (Ebert) Scheffler was born on October 15, 1927 in Pipestone, Minnesota to William and Christena (Thompson) Ebert. She moved to Hancock, Iowa when she was 4 years old with her family and remained in the Hancock area her entire life. Fay was a student at the Hancock School graduating in 1945. She and her 4 sisters played on the Hancock High Girls Basketball team; the five Ebert girls were a tough opponent on the girls’ court. After high school, Fay worked at the Hancock Post office until her marriage. Fay was a life-long member of the Hancock United Methodist Church, where she was active in U. M. W. and many other church activities. Fay met Donald Scheffler in Hancock; they were childhood friends and classmates. Fay and Don were married on June 1, 1949 at the Broadway United Methodist Church in Council Bluffs. To this union four children were born: Jim, Jane, Lisa and Mark. Fay was a homemaker, enjoyed family gatherings, and loved children. Her grandchildren and great grandchildren looked forward to every visit. Fay and Don enjoyed 72 1/2 years of marriage. Fay and Don have been avid sports fans; they especially loved watching their children, grandchildren and great-grandchildren in AHSTW sports. Fay also cherished her many friends. She loved spending time with them regularly over a cup of coffee and good conversation. On Thursday, December 23, 2021, Fay passed away at the Avoca Specialty Care Center having attained the age of 94 years, 2 months and 8 days. Left to cherish her memory is her husband of 72 years Don Scheffler of Hancock; children Jim Scheffler of Hancock, Jane (Gary) Mohr of Bettendorf, Lisa (Nolan) Paulsen of Omaha, and Mark (Toni) Scheffler of Hancock; 10 grandchildren: Tom, Doug and Mike Scheffler; Nick, John, Craig and Casey Mohr; Eric Paulsen; Kinsey and Cole Scheffler; 23 great grandchildren: Stella, Lily, Callie, Duke, Jack, Dixie, Molly, Roman, Katie, Guy, Max, Ben, Chris, John, David, Kylie, Myles, Jack, Colton, Oliver, Caroline, Charlie and Theo. She is survived by nieces and nephews, and many, many friends. In lieu of flowers, please direct memorials to the Hancock United Methodist Church

Fay (Ebert) Scheffler was born on October 15, 1927 in Pipestone, Minnesota to William and Christena (Thompson) Ebert. She moved to Hancock, Iowa when she was 4 years old with her family and remained in the Hancock area her entire life. Fay... View Obituary & Service Information

The family of Gladys Fay Scheffler created this Life Tributes page to make it easy to share your memories.

Send flowers to the Scheffler family.