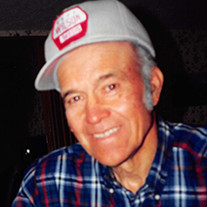 Gerald John Reinig was born November 30, 1923, on a farm near Panama, Iowa, to John and Margaret (Schwery) Reinig. Gerald attended country school house #7 in Washington Township, which is now displayed as a museum in Panama, Iowa. He finished 8th grade and then worked on the family’s farm and planting checked corn, picking corn by hand, thrashing crops, hand milking cows, and tending to horses. His favorite draft horse was Molly as he claimed she outworked the others. But most of all, Gerald grew to love the land. Gerald met Loanne Buman and were married in 1949. To this union were 5 children: John, Joe, Leroy, Mary (Dan) Kertz, and David. Gerald enjoyed parish picnics, fairs, fundraisers, farm shows, community events, and you might have caught him watching an episode of Lawrence Welk or listening to polka music. He also frequented the local coffee shops and grain elevators much of his professional life. Gerald was active and a strong supporter of St. Mary’s Parish of Panama, Iowa, and then St. Michael’s Parish in Harlan, Iowa. He believed in helping others as he always supported Bishop Arkfeld’s mission in New Guinea and the Knights of Columbus. Helping those in need was always a priority as he provided substantial financial support to 49 charities. Gerald enjoyed traveling. He made a few trips overseas with his brother Clarence and made it to all 50 stated with his family. He also made many trips to Washington, DC, where his daughter and youngest son lived at times. In October of 2018, Gerald had a car accident that permanently set him back. He never fully regained his physical abilities and made numerous stays in the hospital as a result of injuries. Having attained 98 years, 4 months and 9 days, Gerald passed away April 8, 2022, in his home with his son at his side. In his closing year, a team of 7 nurses cared for him in his home which the family is deeply grateful for. Left to cherish his memory is his wife of 73 years, Loanne, all of his children: John Reinig, Harlan, Iowa; Joe Reinig, Portsmouth, Iowa; Leroy Reinig, Orange, California; Mary Kertz (Dan), Moberly, Missouri; and David Reinig, Little Sioux, Iowa; and 3 grandchildren Andrew and Grace Kertz and Carson Reinig. He is also survived by siblings Helen Mouser, Wichita, Kansas; Alice Reinig (Norm Schoenfeld), Del Mar, California; Ed (Betty) Reinig, Harlan, Iowa; sisters-in-law Jann Reinig, Portsmouth, Iowa; and Sylvia Kepford, Fullerton, California; and many nieces and nephews that were all part of his life. He walked with the Lord. Gerald only looked at the good in people and never spoke ill words of anyone. He was well respected in his community. He kept a rosary in his pocket at all times throughout life. Gerald always had a place for the Lord while on earth and we believe the Lord has a place for him now.

Gerald John Reinig was born November 30, 1923, on a farm near Panama, Iowa, to John and Margaret (Schwery) Reinig. Gerald attended country school house #7 in Washington Township, which is now displayed as a museum in Panama, Iowa. He finished... View Obituary & Service Information

The family of Gerald Reinig created this Life Tributes page to make it easy to share your memories.