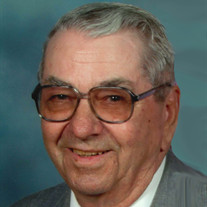 Gerald Henry Bruck was born September 6, 1925 to Charles and Margaret (Blum) Bruck at Earling, Iowa. He was baptized, made his first communion and was confirmed at St. Joseph’s Catholic Church in Earling. He attended school through the eighth grade and then started to help his father with farming. Gerald found the love of his life when he met Velma Buschkamp. They were married on September 7, 1949. To this union they had seven living children: Jody, Gerald Jr, Colleen, Michelle, Vernon, Robin, and Karen. Farming and his family were the joys of his life. In addition to farming Gerald and Velma, milked cows, raised hogs and chickens. Velma was always glad because Gerald was very good at plucking chickens. As the kids and grandkids grew up, Sundays were always special days as they gathered together for BBQ and games on Sundays out on the farm. After they retired from farming, they loved to go to the Spencer fair every year just to look around and see all the new machinery, which was a lot larger than when he started to farm. Gerald and Velma also worked part time at Varieties in Harlan. In June of 2017, Gerald moved to Little Flower Haven in Earling, where he made his home and was greatly appreciated by loving care of staff until they closed, then he moved to the Manilla Manor on October of 2019. Gerald passed away on Thursday, December 24, 2020 at the age of 95. He was preceded in death by his loving wife Velma of sixty years, his parents, daughters, Karen Hill and Michelle Slater, brothers, Leonard, Lavern, Richard, Alfred, and infant brother Albert, son-in-law Glen Spinler. He is survived by their children: Jody Bruck of Avoca, Iowa; Jerry Bruck and his wife Aline of Harlan, Iowa; Colleen Spinler of Papillion, Nebraska; Vernon Bruck and his wife Pat of Denison, Iowa; Robin Bruck and his wife Carolyn of Denison, Iowa; his sister Mary Ann Schwery of Panama, Iowa; 19 grandchildren; 34 great grandchildren; 4 great-great grandchildren; many nieces and nephews along with many friends. Gerald was a loving father, grandfather, great grandfather, great-great grandfather, and will be missed greatly by all. Masks and Social Distancing will be required during visitation hours. Live streaming will be available to watch the Mass Service on the Pauley Jones home page. No lunch will be served due to Covid-19.

Gerald Henry Bruck was born September 6, 1925 to Charles and Margaret (Blum) Bruck at Earling, Iowa. He was baptized, made his first communion and was confirmed at St. Joseph&#8217;s Catholic Church in Earling. He attended school through... View Obituary & Service Information

The family of Gerald H. Bruck created this Life Tributes page to make it easy to share your memories.

Send flowers to the Bruck family.