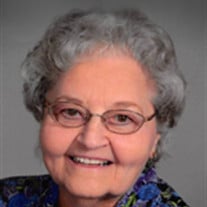 Georgena Mary Callahan was born on July 5, 1932 in Minot, North Dakota to Vivian Georgina Kelly and Daniel Anthony Callahan. Georgena was baptized on July 25, 1932 at St. Jerome's Catholic Church in Mohall, North Dakota and made her First Communion at St. Patrick's Church in Iowa Falls, Iowa in June of 1939. She was confirmed in her faith at St. Mary's Catholic Church in Marshalltown, Iowa. Georgena moved often growing up due to her father working as GM for General Harvester, including 5 different states and 3 cities in Iowa. After graduating from Hampton High School with the class of 1950, Georgena attended Teacher's College in Cedar Falls graduating with a teaching degree in 1952. Georgena met Terrance Peter Knott while he was coaching and teaching at the Iowa Training School for Boys in Eldora, Iowa in 1952 and they were married November 26, 1954. To this union 3 children were born: Krysten "Kookie", Tyler, and Kitt "Kitty". "Mom" was a tyrant when it came to schooling, "No Bad Grades in this house or you're Grounded!" Terry knew to back her or he'd be in trouble also. She was crazy over all of her grandchildren and great grandchildren, regardless if they shared the same blood, spoiling them all as much as she could. Coy and Gram have a special "Bond" (Kara's boy). She had been his standby babysitter since he was born. In 2019 she took care of Coy full time for the summer and they did a lot of fun things. When Coy was in Kindergarten she picked him up 2 days a week after school. One day when they had an after school lunch Coy said "Gram - you know you are old and someday you're going to die and go to heaven"! Gram agreed this might happen and he said "But I won't cry for you because You and Jesus are going to have so much fun - He'll dance and sing and play games with you, cause Jesus is a "Good Guy" and I will be so happy for you. Well, since that time she looked forward to going to Heaven to be with Jesus. Coy assured her she would see everyone that she loved. "I've climbed the ‘Mountain' and I'm going over - No one can stop me now - So here I come!" Georgena passed away surrounded by her loving family on Thursday, February 11, 2021 at her home, attaining the age of eighty-eight years, seven months, and six days. In addition to her parents, she was preceded in death by her husband Terry, and siblings Donna Riley, Collette "Cetsie" Andersen, Clyde Callahan, Daniel Callahan, and Terrance Callahan. She is survived by her children Krysten "Kookie" Knott of Omaha, NE; Tyler (Annette) Knott of Pisgah, IA; Kitt "Kitty" Knott (Shane) of Denison, IA; grandchildren Ryan (Kristin) Webb; Kara Webb (Thomas); Jesy (Brittany) Webb; Kealy (Austin) Schaben; Marissa Knott (Ryan); Chris (Jamie) Koch; Kelly (Nicole) Koch; Collin (Jenna) Koch; Brooke (Cody) Van Ness; Summer Wulf (Adam); great-grandchildren Coy, Chase, Jackson, Kambry, Jett, Margot, Isla, Brandt and several others that she considered "grandchildren"; nieces and nephews; other family members and friends.

The family of Georgena Mary Knott created this Life Tributes page to make it easy to share your memories.

Send flowers to the Knott family.