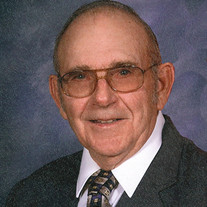 George Theodore Schwery was born June 25, 1930, in Panama, Iowa, the first born son of Anton and Alexia (Hoffman) Schwery. He died February 15, 2022, at the age of 91, in the company of family and staff in Hansen House, Harlan, Iowa. George and Maxine Book met at the last dance before Lent, and were married January 21, 1956, in Harlan, Iowa. They were parents to a houseful of children: Nick Schwery of Panama; Paula Wallace of Omaha, NE; Phil (Marilyn) Schwery of Panama; Dennis (Susie) Schwery of Panama; Ann (David) Hodapp of Council Bluffs; Dean Schwery of Hickory, NC; Carol Schwery of Harlan; Janet (Tom) Lefeber of Portsmouth; and Julie (Steve) Determan of Fairfax, VA. Grandchildren and great-grandchildren made Christmas all the more fun. George served in the United States Marine Corps at Camp Pendleton, in California from December, 1951, to November, 1953, earning a rank of Corporal. There he developed his skills as a mechanic, performed military police duties, and was an excellent shot, earning a marksmanship medal. He was a faithful member of American Legion Post 601 in Panama for 62 years, serving many years as Commander. Among the many things he loved about his service in the Marines and with the American Legion, was a tradition of the flag displayed at home or flown proudly for veterans on Memorial Day. George was a member of the Shelby County Beef Producers and a past director. George also served for many years on the Washington Township Volunteer Fire Department. Many will recall George working the bingo stand at parish picnics every summer, of course, wearing his black boots. Neighbors will remember him picking up mail and his helping hand. George farmed his entire life, and for several years had a trucking business with his brother, Mike, hauling livestock and grain for area farmers. When there was a break from farm duties, he enjoyed short trips with Maxine to visit family and friends, and occasionally attend NASCAR races. He was also part of a small group of friends who played cards regularly. When his wife, Maxine, was ill in the late 1990’s George started building bluebird and wren houses, many of which are still in use in parts of the county. His grandchildren remember him for tractor or pickup rides, gardening, the race track in the basement, fishing trips to an area pond, fixing broken toys, target shooting, and helping with newspaper deliveries, among many other adventures. George was preceded in death by his wife, Maxine, in 2019; his parents; his brothers Michael and Joseph Schwery and his sister Rosemary “Rosie” and her husband, Ed Greiner. He is survived by his children, grandchildren, and great-grandchildren; brother, Ralph Schwery, of Panama; sisters-in-law Luetta (Michael) Schwery of Harlan and Donna (Joseph) Schwery of Panama; brother-in-law Ray (Maxine) Book of Harlan; and many nieces and nephews. In lieu of flowers, donations in memory of George T. Schwery, may be directed to: American Legion Post 601; Shelby County Catholic Schools; St. Mary’s Catholic Church in Panama, Iowa; Hansen House; or Every Step Hospice.

George Theodore Schwery was born June 25, 1930, in Panama, Iowa, the first born son of Anton and Alexia (Hoffman) Schwery. He died February 15, 2022, at the age of 91, in the company of family and staff in Hansen House, Harlan, Iowa. George... View Obituary & Service Information

The family of George T. Schwery created this Life Tributes page to make it easy to share your memories.

Send flowers to the Schwery family.