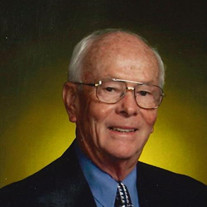 Long-time Denison resident, George Parker Berry, age 94, died peacefully on December 7, 2020 at the Crawford County Memorial Hospital. George was born on March 21, 1926 in Logan, Iowa to parents George and Katharyn Berry. He attended Logan High School, graduating in 1943. Following High School, he attended Creighton University in Omaha from 1943-1944. In the fall of 1944, he entered the U.S. Navy and went to the Hospital Corps school in San Diego, California, after which he was stationed at the Norfolk Virginia Naval Operating Base Hospital until August 1946. George then resumed his education at the University of Iowa in pre-dentistry. In 1949 George was admitted to the College of Dentistry at Creighton University. He graduated from dental school in 1953. This was a big year in George's life because he also married Shirley King of Lincoln, Nebraska. However, the Navy was not through with George and he was drafted again for service that year. This time he entered the Navy Dental Corps for one year and he and Shirley moved to San Diego where he was stationed on the U.S.S. Dixie. Upon discharge from the Navy, George's professional life began in earnest. He and Shirley moved to Omaha, Nebraska where he did post-graduate work in orthodontics and pedodontics. They moved to Denison, Iowa in 1956 where George started his dental practice and he and Shirley celebrated the birth of their daughter Susan that same year. He thoroughly enjoyed practicing dentistry in Denison. During those years George served his profession is various ways. He was a member of the American Dental Association and the Iowa Dental Association. He served on the American Board of Dental Examiners, as well as the Iowa and Nebraska State Boards of Examiners. He also served as president of Iowa's Southwest Dental Association. George was on the Creighton College of Dentistry Advisory Board for more than thirty years and stayed in contact with fellow Creighton classmates throughout his life. He retired from dentistry in October 1997 after 44 years of practice. George enjoyed so much about small town living and he was so happy in Denison. He and Shirley celebrated the birth of their daughter Susan in Denison and loved family life there. He got involved in civic work by serving on the Airport Commission and dedicated over 30 years to the betterment of Denison's airport. He enjoyed making his home a warm and welcoming place and he particularly enjoyed yard work. He loved spending time with his grandchildren in Iowa and in Virginia and with friends in Denison and Omaha. George and Shirley were married for 67 years and in that wonderful life together they enjoyed traveling in the US and abroad, attending various performing arts events, and simply enjoying each other's company over a good meal. He is survived by his wife Shirley Berry of Denison; his daughter Susan (Christopher) Hill of Lovettsville, Virginia; his grandson, Matthew Hill of Washington, DC; and his granddaughter, Katie Hill of Arlington, Virginia. In lieu of flowers, memorial contributions can be made to the Eventide Foundation.

The family of Dr. George P. Berry, D.D.S. created this Life Tributes page to make it easy to share your memories.