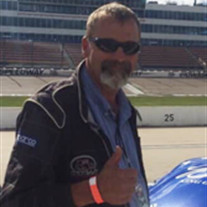 Gary “Bandit” Lee Gubbels, son of Nicholas “Nickie” and Marge (Fahn) Gubbels, was born on April 29, 1960 in Harlan, Iowa. He was baptized, received his first holy communion and was confirmed at St. Mary’s Catholic Church in Panama, Iowa. Gary started his education at St. Mary’s Catholic School in Panama and continued it in Harlan where he graduated from Harlan Community High School with the class of 1979. After completing high school, Gary served his country honorably in the United States Army National Guard. On August 4, 1984, Gary was united in marriage to Carmen Ann Heese at St. Joseph’s Catholic Church in Earling, Iowa. Shortly after they were married, the couple made their home in Rural Earling, Iowa where Gary and Carmie became members of St. Boniface Catholic Church in Westphalia, Iowa. Gary started Gary’s Diesel Repair Shop. Two sons, Tyler and Terry soon joined their family. Through the years, “Bandit” also worked for Western Engineering in Harlan, One Ton Welding in Panama and Farm and Fun then became the new location of Gary’s Diesel. Gary loved smoking and grilling meat and what started out as a hobby soon turned into a business. Gary joined his long time friend, Dick Keane, and they started Lil’ Angels BBQ. Gary was a member of the Westphalia Volunteer Fire Department for over thirty-five years. He was his own “MacGyver” and he could fix anything he put his mind to. He would do anything for his friends and family and enjoyed fishing, camping, watching Nascar, going to races and spoiling his grandchildren most of all. “Bandit” died on July 9, 2019 at Myrtue Medical Center in Harlan, Iowa having attained the age of fifty-nine years, two months and ten days. In addition to his father, Gary was preceded in death by his mother-in-law, Catherine Heese. He is survived by his wife Carmie Gubbels of Earling, Iowa; sons Tyler Wood and his husband Chad of Norwalk, Iowa and Terry Gubbels and his fiancé Michelle of Earling; 3 grandchildren: Nickolas, Melanie and William; his beloved dog Sugar and grandpuppy Sadie; his mother Marge Gubbels of Harlan; siblings: Phil Gubbels and his wife Denise of Panama; Dean Gubbels and his wife Norma of Panama; Mary and her husband Mike Tremel of Earling; Susie and her husband Mike Wingert of Panama; and Joe Gubbels and his wife Joan of Harlan; his father-in-law, Vince Heese of Earling; nieces and nephews; other relatives and many friends.

The family of Gary "Bandit" Gubbels created this Life Tributes page to make it easy to share your memories.

Send flowers to the Gubbels family.