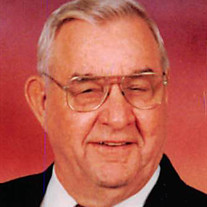 Fred "F.W." Lanz was born March 26, 1921, in Glen Ullin, North Dakota, to Frank and Helen (Smith) Lanz. When Fred was 13, his father passed away and the Lanz family relocated to Cresco, Iowa, where Fred attended high school, graduating with the Cresco High School class of 1939. Following his high school graduation, Fred was employed as an electrician. However, his boss gave him two weeks' notice of termination, insisting he go to college. Fred enrolled at Westmar College where he was a four-year starter as an offensive guard on the football team and earned his degree in May 1943. On June 20th, 1943, Fred enlisted in the United States' Navy and served during the Second World War, receiving an honorable discharge in February 1946. Fred was a proud naval veteran and was honored to have served the country he loved. On July 5th, 1947, Fred was united in marriage to Alvina Donner in Waterloo, Iowa. Together, Fred and Alvina were blessed with five children, Linda, Carol, Peggy, Fred, and Donna. From 1946 to 1962, Fred was employed by Rath Packing Company, serving in various roles in several locations throughout the United States. In September 1962, Fred began working at Iowa Beef Packers in Denison, Iowa, working at IBP until 1969. In May 1969, Fred became co-owner of Marvin's Provisions in Vail, Iowa, working as vice president and sales manager until retirement in 1981. Fred was a member of the Denison United Methodist Church, where he belonged to the church's men's club and choir, and served as the church treasurer and a member of the finance committee and board of trustees. Fred enjoyed music, golfing with friends, gardening, and loved to travel. Above all hobbies, Fred enjoyed spending time with those he loved: his family filled him with pride and joy. On June 11th, 2019, Fred passed away at Eventide Lutheran Home in Denison, Iowa, attaining the age of 98 years. He was preceded in death by his father, Frank Lanz; his mother, Helen Lanz; his brothers, Arthur, Robert, Laverne Lanz, his sister Lillian; and an infant granddaughter, Elizabeth Koch. Left to cherish his memory is his wife, Alvina of Denison; his children, Linda Pohlenz and her husband Lou of Gilbert, Arizona, Carol Birchfield of Rockford, Illinois, Peggy Wheat of Frisco, Texas, Fred Lanz of California, and Donna Koch and her husband Tom of Denison; six grandchildren, Courtney Monedero and his wife Sarah, Matthew Monedero, Jennifer Goode and her husband Josh, Jared Koch and his wife Kathryn, Nathan Koch and his fiance Kaylie, and Rachel Koch and her fiancé Ryan; seven great-grandchildren; sisters, Bernice Kirkpatrick and her husband Bruce of Minnesota, and Lauraine Baker and her husband Larry of Waterloo, Iowa; and many nieces and nephews.

Fred "F.W." Lanz was born March 26, 1921, in Glen Ullin, North Dakota, to Frank and Helen (Smith) Lanz. When Fred was 13, his father passed away and the Lanz family relocated to Cresco, Iowa, where Fred attended high school, graduating with... View Obituary & Service Information

The family of Frederick "F.W." Lanz created this Life Tributes page to make it easy to share your memories.

Send flowers to the Lanz family.