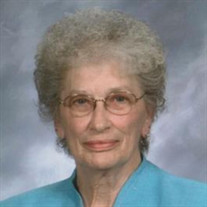 Freda Faye Nielsen, was born in Bosworth, Missouri on October 17, 1935 to Paul Muller and Verlee (Dewey) Muller. "Faye", as she was known as by her family and friends, along with her twin sister Maye, joined their sisters Marjorie, Dorene and Louise to complete their family and Faye wasn't hesitant to remind them that she was the youngest! When she was eleven years old, her family moved from Bosworth to Defiance, Iowa and because the Defiance school had closed, the girls rode the bus to Irwin for school. Faye was active in school participating in chorus, plays and sports, and with her as a forward, and twin sister Maye as guard, they both lettered and made the all star county basketball team for Shelby County their senior year, graduating from Irwin in 1953. After graduation she married Clinton Hulsebus and to their union a daughter, Pamela, was born. Her and Clinton divorced after a few years. Some time during the 1950's she went to work for Louis Christensen at his print shop in Harlan and even after she worked for him, Louis and his wife Irene remained very good friends throughout their lifetime. That time frame also is when she started bowling which she excelled at, winning many awards over the years. She met Gunnar Nielsen and although living in Iowa they married in Minnesota in 1963. They moved to Norwalk and while living there in 1964 their son Jeff was born. They then moved to Sioux City but settled in Storm Lake for a time where she met and had friends but she met her best friend, Judy Henderson. Her friend Judy passed away in 1975 which was felt very deeply by Faye. Gunnar and Faye moved from Storm Lake to Defiance in 1973 and she worked cleaning homes for many years. Her clients became long term because of the meticulous work she always did. They eventually moved to Harlan but their marriage ended in 1989. Although the marriage ended they still remained friends and together would have Christmases and birthday celebrations with their family. Later in their lives she and Gunnar would on Saturday nights go out for supper, even up to the time of Gunnar's passing. This was something they both looked forward to every week. Family, family, family that was what her life was about, whether it be sisters, children, grandchildren, cousins, nieces or nephews, church family, even the friends she had that were like family to her, family was what she loved. The Dewey Reunion, held every Labor Day from the mid 1960's until recently, was a highlight not only to her but everyone that was there. Faye and her sisters remained very much a part of each other's lives taking many laughter filled yearly trips with each other, even a trip to Hawaii together. She loved her sisters so very much. Faye also had a family at the Defiance United Methodist Church where she attended and served for over forty five years. She was a very faithful member and it was out of the ordinary not seeing her there to help with the lunches, special events while also doing the bookkeeping and cleaning the church weekly. But her grandchildren were the special, special ones in her life. "Grandma Faye's" was a place they loved and she absolutely loved having them there, she made their birthday celebrations and Christmases special. She loved all of them the same but her grandson Jason had a very special bond, and they were so very supportive of one another when it was needed. Faye went to be with her Lord and Savior on Thursday, March 19, 2020 at Jennie Edmunsen Hospital in Council Bluffs, Iowa after a brief illness. She was preceded in death by her father Paul, mother Verlee and granddaughter Tanya. She is survived by her daughter Pam Marchant of Chester Idaho, her son Jeff Nielsen of Harlan, grandchildren, Darcy (Norene) Geary of Homedale, Idaho and Brandon (Leslie) Hildebrand of St Anthony Idaho, Jason Nielsen and Jacob Nielsen of Irwin Iowa, great grandchildren Tyler Eaves of Christianburg Virginia, Joseph Walbridge, Cameron Geary, Gilbert Garza Jr., Sarina Garza, Tony Garza, Riley Hildebrand, Gracie Hildebrand,and Callie Hildebrand all of Idaho and great great grandchildren Gilbert Garza III and Leo Garza also of Idaho. Sisters Margorie (Leroy) Poire of Jefferson City Missouri, Dorene Miller and her special friend Dale Peacock of Tucson, Arizona, Louise (Bill) Ahrenholtz of Defiance, Iowa and Maye Wiemers of Spencer, Iowa, many neices and nephews, extended family and friends. A Celebration of Life will be planned at a later date. Family wishes memorials be directed to the funeral home.

Freda Faye Nielsen, was born in Bosworth, Missouri on October 17, 1935 to Paul Muller and Verlee (Dewey) Muller. "Faye", as she was known as by her family and friends, along with her twin sister Maye, joined their sisters Marjorie, Dorene and... View Obituary & Service Information

The family of Freda Faye Nielsen created this Life Tributes page to make it easy to share your memories.

Freda Faye Nielsen, was born in Bosworth, Missouri on October...

Send flowers to the Nielsen family.