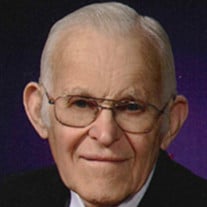 Francis was born September 29, 1920 to Nicholas and Mary Eckerman Kenkel of Defiance, Iowa. Francis passed away on July 7, 2020 having attained the age of 99 years, 9 months, and 8 days. Francis stayed close to home in the Defiance area. In 1950 Francis married Mary Ann Buman and they settled north of Defiance on a farm and raised six boys. Francis and Mary Ann moved to Defiance in 1983. Francis retired from farming at the age of 70. Francis and Mary Ann enjoyed wintertime in Sun City West, Arizona and returning to Iowa in the Spring. Francis was active in many agricultural organizations that he enjoyed. Francis served as a member of Harlan Community School Board, and the State Board of Education. Francis was a member of St. Peter’s Parish in Defiance and involved in the Knights of Columbus in Arizona and Defiance. Francis’s new passion became woodworking. He enjoyed making and discovering new ways of using wood. Many hours were spent constructing his Cathedrals which he took great pride in building. Francis was the oldest of ten children. He was preceded in death by his parents Nicholas and Mary Kenkel, his wife Mary Ann of 66 years, and one brother Clarence (Joe), brothers-in-law, Glen Juelsgard, Jim Anderson, Bud Rossi, Lud Buman, Don Buman, and Ray Buman. Francis is survived by six sons Jim and Pam of Woodward; Gene of Defiance; Alan and Jo of Defiance; Mike and Jean of Council Bluffs; Pat and Christina of Knoxville, TN; and Kevin and Diane of Mitchell, SD. Francis has 18 grandchildren and 25 great grandchildren. Francis’s siblings include; Helen Juelsgard of Walnut; Mildred Anderson of Milwaukee, WI; Eileen Rossi of Milwaukee, WI; Alice Buman of Harlan; Madonna and Clarence Neppl of Salida, CO; Robert and Bernice Kenkel of Scottdale, AZ; Mary Pat and Walt Sweetman of Highland Ranch, CO; Nick and Mary Ann Kenkel of Lakeville, IN; sisters-in-law Della Kenkel of Johnston; Marian Buman of Harlan; Alice Bontz of Council Bluffs, and Clarice Buman of Harlan. Also brother-in-law and sister-in-law Dr. Ken and Norene Pavlik of Verdigre, NE. He will also be missed by many nieces, nephews, and friends.

Francis was born September 29, 1920 to Nicholas and Mary Eckerman Kenkel of Defiance, Iowa. Francis passed away on July 7, 2020 having attained the age of 99 years, 9 months, and 8 days. Francis stayed close to home in the Defiance area.... View Obituary & Service Information

The family of Francis Nicholas Kenkel created this Life Tributes page to make it easy to share your memories.

Francis was born September 29, 1920 to Nicholas and Mary Eckerman...

Send flowers to the Kenkel family.