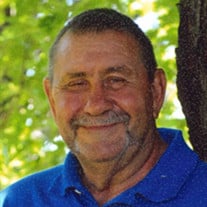 Francis Nicholas Funk, son of Lawrence and Barbara (Windeshausen) Funk, was born on November 5, 1940 in Harlan, Iowa. He attended school at St. Mary’s Catholic School in Portsmouth graduating with the class of 1958. After high school, Frank farmed the family farm outside of Portsmouth, Iowa. On August 11, 1970, Frank was united in marriage to Judith Mary Weihs in Blair, Nebraska. To this union four children were born: Susan, Kelly, Kathi and Kyle. After their marriage, Frank and Judy continued to farm the family farm until 1986 when Frank decided to attend Iowa Western Community College in Council Bluffs, Iowa where he received his Associated Degree in Electronics. After obtaining his Associates Degree, Frank started to work for the Omaha Public Power District (OPPD) at the Fort Calhoun, Nebraska Nuclear Power Plant until his retirement in 1999. Frank was a lover of the outdoors and enjoyed hunting, and was an avid arborist. He also enjoyed sports especially playing and watching baseball and basketball. His favorite players were Hank Aaron and Julius Erving. Frank always had a special place in his heart for his dogs. He lost his faithful friend Zoe this past June. Frank and Judy loved to travel and took several memorable vacations with their children. After their children were grown, Frank and Judy continued their love of traveling where they visited many of the Indian Mounds, National Parks and other areas important in the history of our country. His greatest love was his family and he enjoyed visiting with his children and grandchildren any chance he could. Frank died at his home outside of Portsmouth surrounded by his family on October, 4, 2019 having attained the age of seventy-eight years, ten months and twenty-nine days. In addition to his parents, he was preceded in death by his siblings: Lawrence, Alfred, Josephine Arkfeld, Harold, Joseph, Herbert, Cecilia Wegner and Marie Funk. Frank is survived by his wife Judy Funk of Portsmouth; children: Susan and her husband Daniel Schulte of Portsmouth; Kelly Keane and her fiance Bob Fox of Panama, Iowa; Kathi and her husband Jim Christie of Omaha, Nebraska and Kyle Funk and his wife Julie of Portsmouth; thirteen grandchildren; nine great grandchildren; in-laws George Arkfeld of Oceanside, California; Lucille Funk of Seattle, Washington and Carol Funk of Sacramento, California; nieces and nephews; other relatives and many friends.

Francis Nicholas Funk, son of Lawrence and Barbara (Windeshausen) Funk, was born on November 5, 1940 in Harlan, Iowa. He attended school at St. Mary&#8217;s Catholic School in Portsmouth graduating with the class of 1958. After high school,... View Obituary & Service Information

The family of Francis "Frank" Funk created this Life Tributes page to make it easy to share your memories.

Send flowers to the Funk family.