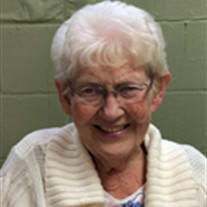 Frances Marie Bettcher, daughter of Henry J. And Margaret (Kay) Plagman, was born February 5, 1938 in Corley, Iowa. She was baptized at United Lutheran Church in Shelby, Iowa and confirmed at First Lutheran Church in Avoca, Iowa. She attended country school through the 8th grade then graduated from Harlan High School with the class of 1956. On February 8, 1959, Frances was united in marriage to Merle Dean Bettcher at the First Lutheran Church in Avoca. In 1960 their first daughter , Tammy, was born in San Diego, California. After her birth, they returned to Omaha, Nebraska, where Merle worked at Safeway. Their son, Terry, was born in 1961 and their daughter, Kris, was born in 1964 in Omaha. Merle and Fran moved to Harlan, Iowa in 1969. Merle and Fran loved camping. She also loved her sports: Nebraska football, basketball volleyball, and following Creighton Blue Jays Basketball and Iowa State football and basketball. She enjoyed spending time with her sisters playing cards and dominos. She also enjoyed her new friendships she made at Westridge Apartments. Most of all, she loved the time spent with her children, grandchildren, and great grandchildren. Fran died on Thursday, September 12, 2019 at Myrtue Medical Center in Harlan, Iowa, attaining the age of eighty-one years, seven months and seven days. In addition to her parents, she was preceded in death by her husband Merle and brother Wayne Plagman. She is survived by her children Tammy Garrison of Harlan, Iowa; Terry Bettcher and his wife Holly of La Vista, Nebraska; Kris and her husband Mark Maxwell of Harlan, Iowa; 8 grandchildren; 7 great grandchildren; sisters Marilyn Burger of Harlan, Iowa; and Ruth Warren of Gretna, Nebraska; nieces and nephews, other family members and friends.

The family of Frances Bettcher created this Life Tributes page to make it easy to share your memories.

Send flowers to the Bettcher family.