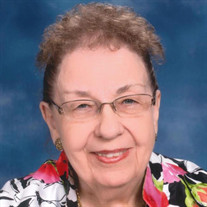 Florence Jeanne Luney Friend daughter of James Gordon Luney and Gladys Marie Singer Luney, was born on November 8, 1922 in Denison, Iowa. She attended school in Ida Grove, Iowa until 1937. The family moved to Harlan, Iowa when her parents bought the IGA Grocery store. She worked in the grocery store after school and on Saturdays. She graduated from Harlan High School with the class of 1940. After high school graduation she attended Dickman Business School in Omaha, Nebraska. Jeanne married Max Leroy Friend on August 3, 1941, her high school sweetheart, at Hanson Park Methodist Church in Omaha, Nebraska. They then lived in Boston, Massachusetts for a short period of time. Jeanne moved back to Harlan when Max left to serve in World War II and the Korean War. Five children were born to this union, Robert Max, Barbara Jeanne, James Leroy, Janet Marie, and Joanne Maxine. Jeanne was baptized at the Presbyterian Church in Denison, Iowa. In 1942 Jeanne joined the First United Methodist Church in Harlan and was an active member. She taught Sunday school for 15 years, Vacation Bible School for 5 years was the Sunday school secretary for 1 year. Jeanne also served on various church committees, the finance committee for 6 years, the memorial committee for 9 years and the worship committee for 9 years. She served on the Prayer chain. Jeanne also served as a greeter, usher, liturgist and communion server and sang in the choir years retiring in 2013. She was known as the “choir mom” taking care of the choir needs. She kept track of what anthems were sang, kept everyone supplied with pencils and made sure that everyone had robes and that they were clean, mended and ironed. In addition to this she made over 200 lap robes for the shut-ins and homeless along with delivering many to the nursing homes. She crocheted baby Afghans and baby caps for the new-born babies in her church family neighbors, friends and Myrtue Memorial Hospital. She was honored with Service in Christ Award in 2014. She worked several years maps for Booth Enterprise. Jeanne then took the bookkeeping job at Gearhart Lumber for 20 years, then bookkeeper for Chamberlain Brothers for 25 years retiring at the age of 85. Jeanne was preceded in death by her infant brother, Thomas Edward Luney, her parents Gladys and Gordon Luney, husband Max L. Friend, sons Robert M. Friend, James L. Friend and daughter Barbara J. Friend Aiktenhead, her mother-in-law Frances Marie Plumb Friend Goodner. She is survived by her daughters Janet M. Friend Swensen (James of Harlan and Joanne M. Friend Kenkel (Alan) of Defiance. She is also survived by 15 grandchildren, 23 great grandchildren, and 2 great-great grandchildren.

The family of Florence Jeanne Friend created this Life Tributes page to make it easy to share your memories.

Send flowers to the Friend family.