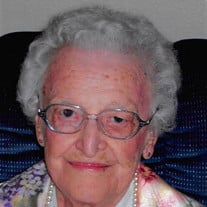 Evelyn Marie Staller was born January 19, 1914, the daughter of Carsten and Marie Christiansen. She passed away on Sunday, April 3, 2022 at Eventide at the age of 108 years and 3 months. Evelyn was born in Crofton, Nebraska and baptized. At the age of 4 her family moved to Denison, Iowa. She was confirmed at Zion Lutheran. She received her education in country school and graduated from Denison High School in 1931. She herself taught country school for 5 years before marrying Herbert Sieck in 1936, and from this union had one son Darold. Herbert was killed in a farm accident in 1937. She renewed her teaching certificate at Buena Vista, Storm Lake and taught country school another 3 years before marrying George Staller on June 21, 1942. From this union was born 2 sons, Willis and Dennis, and 2 daughters Georgene and Linda. They were married 25 years until George’s death in 1967. Evelyn was a 4-H leader for Atomic Starlets and worked at Crawford County Memorial Hospital for 13 years in the dietary department, taking correspondence courses from Iowa State and teaching herself to type to become supervisor. She was a member of Zion Lutheran Church since 1927, of Zion Ladies Aid, Evening Guild, Lamplighters, Wednesday Sewing Circle, and also a member of the hospital auxiliary. She loved to travel, leaving her foot prints in the Mediterranean Sea, Pacific, and Atlantic Oceans. She had various hobbies: oil painting, gardening, music, playing guitar, cooking, baking, and later quilting, making over 300 quilts and throws. She was famous for her cream puffs, kolaches, cinnamon rolls, and pies. Evelyn was preceded in death by her parents, husband Herbert Sieck and George Staller, son Darold Sieck, infant brother Frank, Earl and wife Esther Christiansen, sisters Vi and husband Sam Staller, Ethel and husband Alvin Dixon. Survivors include Willis (Linda) Staller of Blue Springs, Missouri; Jean (Don) Eggert of Denison, Iowa; Linda (Benton) Dick of Kansas City, Missouri; Dennis (Pam) Staller of Herford, Arizona; daughter-in-law Carol Sieck of Mesa, Arizona; 10 grandchildren, 16 great grandchildren, 7 great-great grandchildren; several nieces, nephews, and friends. Memorials may be sent to your choice of any hospice care, Ladies Aid, or Lutheran Hour.

Evelyn Marie Staller was born January 19, 1914, the daughter of Carsten and Marie Christiansen. She passed away on Sunday, April 3, 2022 at Eventide at the age of 108 years and 3 months. Evelyn was born in Crofton, Nebraska and baptized.... View Obituary & Service Information

The family of Evelyn Marie Staller created this Life Tributes page to make it easy to share your memories.

Send flowers to the Staller family.