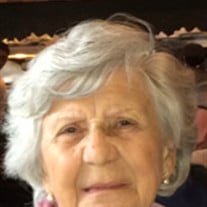 Evelyn Ann Jacobsen Plumb (Heilesen), age 89, passed away peacefully December 12, 2020 at Addington Place in Prairie Village, Kansas. She was born December 18,1930 to Frank R. and Mabel (Berg) Heilesen on her parent’s farm in Douglas Township, south of Irwin, Iowa. Evelyn grew up east of Harlan, Iowa on her parent’s farm in Center Township. She graduated from Harlan High School in 1949. Evelyn worked at Tinsley’s Jewelry store from 1945 until she married Donald “Buzz” Francis Jacobsen in 1949. Buzz and Evelyn enjoyed attending their son’s countless sporting events and socializing with many dear friends during their 29 year marriage. Together they had three sons. Evelyn was a homemaker and a member of the Harlan Methodist Church where she attended church circle. Evelyn’s hobbies included bridge, playing golf, cooking, gardening and attending book clubs. Evelyn worked as a receptionist at the Harlan Vision Clinic and the Harlan doctor’s office until she married Max Plumb on December 25, 1985. The couple divided their time between their home in Harlan and winter residence in Mazatlan, Mexico. Both Max and Evelyn enjoyed extensive travel throughout the world during their 15 year marriage. Evelyn was proceeded in death by her parents; first husband, Donald “Buzz” in 1978; siblings, Frank Heilesen, JR., Donald Heilesen, Richard Heilesen, Bette Sorensen, Caryl West and second husband, Max Plumb in 2000. She is survived by her three sons, Steve and his wife, Judi of Mission Hills, KS; Jeff and his wife, Sandy of Shawnee, KS; Tim and his wife, Macy of Stilwell, KS; five grandchildren, Matt, Sam, Donald, Brad and Brody, and three great-grandchildren June, Maverick and Jackson. In lieu of flowers, the family is asking for a donation to be made to Harlan The Methodist Church.

The family of Evelyn Ann Jacobsen Plumb created this Life Tributes page to make it easy to share your memories.

Send flowers to the Jacobsen-Plumb family.