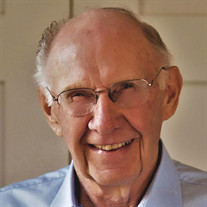 Eugene Alan (Gene) Sornsen was born January 2, 1930, to Harry and Emma (Dethlefs) Sornsen on a farm northwest of Avoca, Iowa. He lived there until he was 8 years old when the family moved to the farm northeast of Avoca where he lived and farmed most of his life. He was baptized and confirmed in the Lutheran Church. Gene graduated from Avoca High School with the Class of 1947. As a youth, he enjoyed hunting and trapping. Following graduation, he farmed with his dad and met his future wife, Maxine. Later, they became the first couple married in the “new” Trinity Lutheran Church. To this marriage, two sons were born: Lynn and Steve. The first three years of marriage he worked for his dad and lived in a house at the current Embers site. They moved to a farm northwest of Avoca for three years. In 1957 they moved back to the farm where Gene grew up. They farmed there for 45 years until they retired and built a house in Avoca just around the corner from their first home. Gene loved everything about farming. He enjoyed working in his shop. Building, overhauling, and improving machinery kept him busy--not only for himself but he would also help neighbors and friends. After using his new International 1086 tractor for a year, he decided they had put the gear shift on the wrong side, so he built a console on the right side, changed the two-lever system into three levers, thus making it shift easier. It looked like it was factory made and he thought about applying for a patent. He was an early adopter for new farming methods and would often adapt machinery in his shop. Along with farming, Gene sold Pioneer seed corn and beans for 9 years. When it was time to go around to get orders for the next year he would wash and wax his pickup and buy new work shoes. He was then ready to go. Some days he wouldn’t sell a bag, but he’d say, “There are a lot of good people in this world”. Gene loved many things in his life. He loved his Lord, his family, and his church family. He loved to dance with his wife and together they attended countless dances with friends and family over the years. He loved his sons and taught them the values of hard work and treating people with respect. He loved his nieces and nephew and was a big part of their upbringing. He loved his daughter in law, Linda, and included her in the family as his daughter. He painstakingly built his granddaughters each a doll house and attended many of their activities as they grew up. He loved his growing family as his granddaughters married wonderful young men and he adored his eight great grandchildren. He loved to visit with people and would often be the last to leave a get together as there was always one more person to visit with. Another of Gene’s passions was playing poker. One of the few times he would shut down his combine early was to join in a friendly game of poker at the Harlan Country Club. In later years, he would catch a ride from Maxine to the Horseshoe Casino to play Texas HoldEm. He met many lifelong friends during these games; many of the dealers still ask about him to this day. Gene was devoted to serving his community. He served as president of several organizations such as the Church Council, Community Club, Jaycees and was a 4-H club county leader. As president of the school board, he helped lead the effort to build a new school in Avoca. He and Maxine were sponsors of three Luther League Youth Convention trips, where they got to know many young people who later became lifelong friends. Gene designed and built a model oil well and strategically positioned it next to the interstate. The well, along with his sign--Oil Leases Available, please call 1-800-DRY-HOLE, garnered much attention from passing motorists and landed him on an Omaha TV station’s evening news. When asked why he built it, he would say, “I always wanted to have an oil well”. Gene was preceded in death by his parents and his brother Ronald. Left to celebrate Gene’s life is his wife of 71 years, Maxine of Avoca, Iowa, his children: Lynn Sornsen of Omaha, Nebraska, and Dr. Steve Sornsen and his wife Linda of Ames, Iowa. Three granddaughters: Brooke (Eric) Johnson of West Des Moines, Iowa, Ashley (Kevin) Terrell of Ames, Iowa, Mallory (Adam) Maahs, West Des Moines, Iowa. Eight great-grandchildren: Jordyn and Myles Johnson; Henry, Violet, Louis, and Georgia Terrell; Emmett and Goldie Maahs; other family members and many friends.

Eugene Alan (Gene) Sornsen was born January 2, 1930, to Harry and Emma (Dethlefs) Sornsen on a farm northwest of Avoca, Iowa. He lived there until he was 8 years old when the family moved to the farm northeast of Avoca where he lived and farmed... View Obituary & Service Information

The family of Eugene "Gene" Sornsen created this Life Tributes page to make it easy to share your memories.

Send flowers to the Sornsen family.