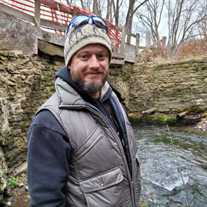 Eric Scott Walton was born on September 10, 1976, to Clarence “Butch” and Mary (Meyer) Walton in Omaha, Nebraska. He grew up in Omaha and attended Millard South High School and graduated with the class of 1994. Eric’s arrival to the Walton Family was a much-anticipated event. He brought so much joy to our family. He was such a good little helper when his brothers, Marc and Reid arrived, always willing to help as best he could. He always had a vivid imagination that took him to other places and times. From playing cowboy to knight to Army to great hunter, he didn’t realize how many of these things would shape him into the man he was to become. His first babysitter, Willie and her husband Steve instilled in him a love of fishing and the desire to be a hunter. He was able to taste many things at their house, fried fish and wild game, that he would never get at home (Dad didn’t like that stuff). They even included him in a fishing trip to Canada. As a boy, Eric loved to fish and later in life would get his chance to go hunting. After graduating from high school, Eric, turned to his adventurous side. Playing army as a child turned into a stint in the Army Reserves. Imagine how Mom felt when he announced that he would be parachuting out of airplanes! Once out of the army he decided that he needed to try something even more dangerous. All of a sudden, he decided that he should become a bull rider. We were never sure just how many of those 8 second rides he was able to complete but he sure made a lot of good friends while traveling and competing at those rodeos. One friend, Dusty, moved back home to Texas and the next thing we knew, Dusty had talked Eric into moving to Texas. In 2001, Eric quit his job, packed his car and moved to Texas. He and Dusty shared a home together and he was soon “adopted” by the Deavers Family. This family loved to hunt, and Eric was finally able to realize his dream...to go hunting. Deer hunting was special to him as he was able to bag his first deer. One of the first jobs Eric had was working on a guest ranch where he met his future wife, Jonnie McAdams. Eric and Jonnie created their beautiful daughter Emma, who soon became the apple of her daddys eye. The two of them spent many fun times together. Being a dad to Emma was a special joy for him. In 2008, Eric moved his family back home to Nebraska. Eric had learned, through trial and error, many different construction skills and was now able to use those skills on his own home and in various workplaces. His last job in Omaha was at Omaha Truck Center. One day the company was hosting a Red Cross blood drive. His fellow workers tried all day to convince him to donate and finally at the end of the day he broke down and said OK to being a first-time donor. As he was being prepped for the blood draw, the phlebotomist asked a simple question “How are you today?” His reply, “short, fat and happy.” This response earned him a first date with Shyla which was soon followed by many more dates. Within a year Shyla had moved into his home, met his daughter, Emma, and the rest of the family and had found herself married into the Walton Family. Eric married Shyla Sue Shadoan on June 29, 2018, in Omaha, Nebraska. Marriage also gained Eric two stepsons, Westley and his wife Kimber, and Alex and his wife Cryssy. Along with these new sons he became “papa” to grandchildren; JayCee, Savannah and Baird. Eric and Shyla soon found themselves moving from Omaha, Nebraska to Walnut, Iowa. Loving small town life, they both decided to open their own businesses. Eric became an independent contractor, using all of the skills he had learned over the years and was known as “Mr. Eric” to 17 daycare kiddos. Eric’s fight with COVID ended his life way too soon but the family felt honored by the fact that he was able to give 2 people a chance for a better life through his organ donation. Eric passed away on Wednesday, January 19, 2022, at the University of Iowa Hospitals and Clinics having attained the age of 45 years, 4 months and 9 days. Survivors include his wife Shyla Walton of Walnut, IA; daughter Emma Jade Walton of Omaha, NE; parents Clarence “Butch” and Mary Walton of Walnut, IA; siblings Marcus (Deanna) Walton of Coconut Creek, FL; Reid Walton (partner Jeni Calhoun) of Harlan, IA; 2 nieces: Eva and Bailey Walton; Shyla’s sons Westley (Kimber) English of Denver, CO; Alexander (Cryssy) English of La Vergne, TN; Shyla’s 3 grandchildren: JayCee and Savannah English, and Baird English; other family and many, many friends.

The family of Eric Walton created this Life Tributes page to make it easy to share your memories.

Send flowers to the Walton family.