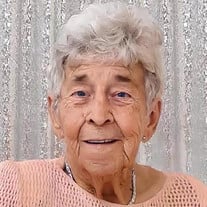 Emma Lou McComb, daughter of Henry and Hilda (Gregosches) Schneller, was born May 31, 1932 near Schleswig, Iowa. She was the third of 6 children. Emma was baptized as a baby, and confirmed in the Lutheran faith in 1949 at St. John’s Church near Kiron, Iowa. She spent her youth in the Schleswig and Deloit area, where she attended school. On July 28, 1949 Emma was united in marriage to Loel Koch and blessed with 4 children: Sandra, Roger, Rodney, and Cindy. They made their home, farming north of Boyer, Iowa, where they had milking cows. Later the family moved to a farm near Vail and Westside, Iowa. On November 25, 1976 she was married to Allen North and moved to a home west of Vail. During this time she owned and operated Al and Em’s Crafts and Hobbies located in Denison and Carroll and a shop in her home. After Allen’s passing Emma was united in marriage to Kay McComb on April 21, 1996 and made their home west of Vail, Iowa. They were blessed with 25 years of marriage and enjoyed traveling, especially to their winter home in Key Largo and Lehigh Acres, Florida, to her daughter in Arizona and trips with her son Roger to Bimini, Bahamas. She loved cooking and baking, especially her signature pies, playing cards with family and friends, fishing, quilting and crocheting rugs to give away to family and friends. She enjoyed time with her family and grandchildren, great grandchildren, and great-great grandchildren. When Kay and Emy were in Florida they volunteered every week assisting to feed the homeless and needy with their friends in Lehigh. Emma passed away peacefully at the age of 89, on Friday, February 11, 2022 at her daughter’s home in Lehigh Acres, Florida surrounded by her family. She was preceded in death by her parents, son Rodney, brother Henry, two sisters, Lorraine (Marlen) Aschinger and Delores (Reed) Dohse, and brother-in-law John Fineran. She is survived by husband Kay of Vail, Iowa; her children Sandra (Doug) Grage of Lehigh Acres, Florida; Roger Koch of North Miami, Florida; Cindy (Bruce) Wiener of Cave Creek, Arizona; stepchildren: Tim, Mike, Deb, and Karen; brother Ronald (Dorothy) Schneller of Comanche, Iowa; brother Robert (Myrna) Schneller of Punta Gorda, Florida; sister-in-law Pat Schneller of Punta Gorda, Florida; grandchildren: Brian Voege, Tammy Kropf, Tony Voege, Dawn Stechelberg, Jonathon Koch, Michael Koch, Wyatt Koch, Alex Bojanski, Chris Koch, Kelly Koch, Collin Koch, Jason Grimsman, Matt Grimsman, Alex Grimsman; 22 great grandchildren, 9 great-great grandchildren, several step grandchildren, and great grandchildren, many nieces, nephews, and friends.

Emma Lou McComb, daughter of Henry and Hilda (Gregosches) Schneller, was born May 31, 1932 near Schleswig, Iowa. She was the third of 6 children. Emma was baptized as a baby, and confirmed in the Lutheran faith in 1949 at St. John&#8217;s... View Obituary & Service Information

The family of Emma Lou McComb created this Life Tributes page to make it easy to share your memories.

Send flowers to the McComb family.