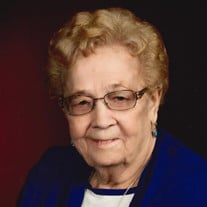 Elvilda (Larsen) O'Neill, the daughter of Nels and Viola (Nelson) Larsen, was born May 11, 1932 in Brookings, South Dakota. Shortly after they moved to Avoca. Elvilda was a member of St. Mary's Catholic Church in Avoca. She graduated from Avoca High School in 1950. On April 18, 1950 Elvilda married the love of her life, Robert "Bob" O'Neill, at St. Mary's Catholic Church. They were the parents of five children: Robert, and a baby who died at birth, Mary Kay, Joseph, and Thomas. Elvilda and Bob bought a farm northeast of Hancock in 1956, a place they made their home for over 30 years. While their children were young, Elvilda stayed at home and took care of the kids, while helping Bob on the farm. As the kids grew older, Elvilda started to work part time, and then eventually she worked full time. Elvilda held the position as a mail carrier for over 25 years in the Avoca area. In the early 1990s, Elvilda and Bob moved to Avoca. In 2001, She retired as a mail carrier. Elvilda was very proud of her Danish background. She also loved going to church. Elvilda would drive through blizzards with her family to get to church on time. When talking about the casino, she would always swear she did not like going; but never turned down a bus trip there when given the opportunity. A passion of Elvilda's to enjoy with her granddaughters, Emily and Noby, were collecting and playing with American Girl Dolls. She loved going to get her hair done on Saturday mornings in Harlan and then go out to breakfast with her girlfriends at Burger King. Elvilda spent many days shopping and going to events with Emily, those were some of her favorite times. Dancing and square dancing were big favorites of Elvilda's and Bob's. They used to travel to Omaha a few times a week to attend square dances. Elvilda loved to travel. She always talked about her cruise she went on in Alaska. Of course her favorite thing to do was read. A farm child growing up, a farm wife raising a family, a loving mom, grandma, and sister: family meant the world to Elvilda. On Wednesday, September 2, 2020, Elvilda passed away at Heritage House in Atlantic. She attained the age of eight-eight years, three months and twenty-two days. Elvilda was preceded in death by her parents, her husband of over 65 years Bob, her son Robert, an infant son, brother James Larsen, and half-brother Kenny Larsen. Those left to cherish her memory are her children Mary Kay O'Neill and her husband Paul Edwards of Chicago, Illinois; Joe O'Neill and his wife Deanna of Atlantic, Iowa; Tom O'Neill and his significant other Lisa Hunt of Hancock, Iowa; grandchildren Danny O'Neill and his significant other Michelle Jenkins of Wasilla, Alaska; Emily Young and her husband Dustin of Avoca; Shaun, Jennifer, and Patrick O'Neill all of Beloit, Wisconsin; Noby O'Neill Edwards and her fiancé Ryan Dalton of Memphis, Tennessee; great-grandchildren Destiny O'Neill of Wasilla, Alaska; Brogyn and Dawson Young of Avoca; Devin. Justin, Kelly, and Kayla O'Neill of Beloit, Wisconsin; sister Donna Wells of Dalhart, Texas; sister-in-law Betty Larsen of Harlan; and several nieces, nephews, cousins, and friends. *Masks are required at St. Mary's Catholic Church*

Elvilda (Larsen) O'Neill, the daughter of Nels and Viola (Nelson) Larsen, was born May 11, 1932 in Brookings, South Dakota. Shortly after they moved to Avoca. Elvilda was a member of St. Mary's Catholic Church in Avoca. She graduated from Avoca... View Obituary & Service Information

The family of Elvilda O'Neill created this Life Tributes page to make it easy to share your memories.

Send flowers to the O'Neill family.