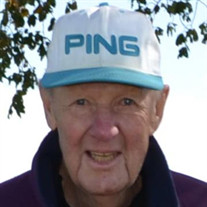 Elmo Peter “Bing” Bengfort, the son of Herman and Mary (Dinges) Bengfort was born on January 19, 1928 in Odebolt, Iowa. He attended Carroll Public School where he graduated with the class of 1946. After graduating highschool Elmo enlisted in the U.S. Navy where he served in WWII. He was honorably discharged on April 14, 1948. After being discharged he returned to Carroll, Iowa and worked for Farner Bocken as a salesman for 24 years. On December 28, 1957, Elmo was united in marriage to Marilyn Houser DeGard in Denison, Iowa. Added to this union were 5 children Scott, Robert, Sandra, Barbara, and Jon. After the passing of his wife Marilyn in 1976, Elmo became a salesman for Equitable Life Insurance. He would continue as a salesman until he retired in 2002. He regularly attended church at St. Rose of Lima Catholic Church in Denison. He was a member of the American Legion Post 8. He had a lifetime membership to the Denison Country Club, where he also served as a board member. He was a member there for 64 years. During the 1960's Elmo became an avid golf player, earning him the nickname “Bing” Bengfort. He collected over a dozen city golf crowns with even more victories in 1972, 1974, 1976, and 1977. He played up to 4 games per week and soon became the 1980 champ. He even competed in the State Club Championship Tournament in Atlantic, Iowa where he finished as high as sixth. Elmo passed away Saturday, August 28, 2021 at St. Anthony Nursing Home in Carroll, Iowa, attaining the age of 93 years, 7 months, and 9 days. He was preceded in death by his parents, Herman and Mary Bengfort, his wife Marilyn, a son Jon Bengfort, sister JoAnn Origer, brother James Bengfort, sister Marilyn Feeney, and brother Ronald Bengfort. Left to cherish his memory are his sons Scott Bengfort and Bob (Jean) Bengfort both of Peoria, Arizona; daughters Sandy (Randy) Waldron of Ottawa, Kansas; Barb (Doug) Rademaker of Fort Worth, Texas; brother Richard Bengfort of Des Moines, Iowa; sister Kathy Bliss of Lake View, Iowa; sister Judy Stricker of Carroll, Iowa; sister Linda (Scott) Zastrow of Urbandale, Iowa; 8 grandchildren and 23 great grandchildren and many more friends and family. In lieu of flowers, memorials may be given to St. Rose of Lima Catholic Church in Denison.

Elmo Peter &#8220;Bing&#8221; Bengfort, the son of Herman and Mary (Dinges) Bengfort was born on January 19, 1928 in Odebolt, Iowa. He attended Carroll Public School where he graduated with the class of 1946. After graduating highschool... View Obituary & Service Information

The family of Elmo Peter Bengfort created this Life Tributes page to make it easy to share your memories.

Send flowers to the Bengfort family.