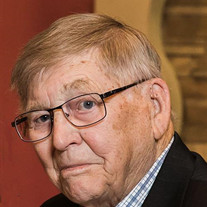 Elmer Eldon Denker, son of Max and Pauline (Thomsen) Denker, was born on August 14, 1925, on a farm in Denison, Iowa. He was confirmed at Zion Lutheran Church in Denison, Iowa on March 17, 1940. Elmer graduated from Denison High School in... View Obituary & Service Information

The family of Elmer Eldon Denker created this Life Tributes page to make it easy to share your memories.

Send flowers to the Denker family.