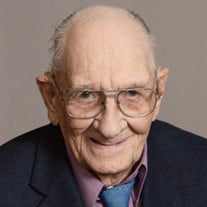 Ellsworth Harper Shannon, age 102, died on Monday, August 17, 2020, at the Manilla Manor in Manilla, Iowa. He was born December 20, 1917, in Greeley Township near Irwin, Iowa, the son of Harper and Helen (Hunter) Shannon. Ellsworth attended school at the Kirkman Community School and graduated high school there in 1935. On December 1, 1940, he was united in marriage to Doris Wailes of Manning at the Methodist Church in Manning. The couple was married for over 66 years, and Doris preceded him in death on April 9, 2007. After their marriage, Ellsworth and Doris lived with his parents in Kirkman for a couple years before they moved to the farm where they lived for over 60 years. Ellsworth had farmed with his father since he was a young boy. In addition to farming and custom baling, he worked various odd jobs during their marriage. For several years he worked for the USDA office (formerly ASCS). He was employed part-time there when he broke his leg in a tractor accident in 1992. Ellsworth was a member of the Irwin-Kirkman Community School Board during the reorganization in the 1950's. He was the oldest member of the Kirkman United Methodist Church where he had attended since he was a baby. There he served on the church board, as a Sunday School teacher and as a Sunday School Superintendent. He was a past 4H leader and worked at the Shelby County Fair with small animals for several years. During holiday seasons, Ellsworth was famous for ringing his sleigh bells to the tunes of Christmas carols, especially when the LNO Club went caroling in the neighborhood. The bells are antique and were used on his family sleigh in his younger days. Ellsworth enjoyed reading, working, fishing, gardening, watching television, especially old westerns and game shows, and playing cards and other games with friends, relatives, and grandchildren. Ellsworth was a mild-mannered man who loved the Lord and his family. In addition to his wife, Ellsworth was preceded in death by his parents, a sister and brother-in-law, Cecilia and Howard Gray, two brothers and sisters-in-law, Bob and Mary Shannon and Bill and Dorothy Shannon. He is survived by three children and their spouses: Pat Olson and husband Norris of Manilla; Nancy Douglas and husband Lynn of Edina, Missouri; and Jack Shannon and wife Lori of Manning. He is survived by three grandchildren: Gloria Irlbeck of Manning, Mark Olson of Council Bluffs, and Shannon Meister of Council Bluffs; five great grandchildren: Melissa (Travis) Riesberg, Michelle (Alex) Johnston and MaKayla Irlbeck, Lauren and Nathan Olson, and three great-great grandchildren: Landyn Irlbeck and Justin and Blake Riesberg. In addition to his children and grandchildren, Ellsworth is survived by cousins and numerous nieces, nephews, and friends.

The family of Ellsworth Harper Shannon created this Life Tributes page to make it easy to share your memories.

Send flowers to the Shannon family.