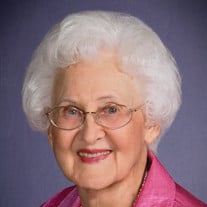 Born in Omaha, NE on April 17, 1922, I was the first born of 4 children to Ambrose and Agnes McPharlin Gladson. My younger days were lived during the great depression, and though we lacked in some material things, we had an abundance of love and caring. After graduation from Cathedral High School, I attended Van Sants Business College. Completing my studies, I took a civil service exam and began doing clerical work for the Army Medical Corps during World War II. I met and married my husband, William S. Markham, in 1944, while he was attending Creighton University Medical School. We moved to California for his Navy internship during WWII and stayed for 7 years through the Korean War. I was left alone with 4 children while he served as a ship’s doctor in the Sea of Japan. We were in Kansas investigating possibilities of a medical practice after his discharge from the Navy, when we had an automobile accident resulting in the loss of my husband's left leg. In 1955, we moved to Harlan, IA with 5 children when Bill went into practice with a classmate from medical school, R.E. Donlin. In 1958, we lost our second oldest child, daughter Cherie, in a boating accident. She drowned in West Lake Okoboji at the age of 12 1/2 years. We pulled our lives together and had five more children, the last two being twin boys. My work was cut out for me. Besides feeding, loving, and caring for a husband and 10 children, I found myself doing all the extra things you do as a mother: Brownies and Girl Scouts, Cub and Boy scouts, 4-H, a band parent, drama, dance, numerous athletic events, etc. Then there were the medical and hospital auxiliaries, church parish council, church guild and being a lector and lay minister at St. Michael's Catholic Church and a member of the liturgy committee. I was also a member of P.E.O. and Review Club. In 1969, after 25 years of marriage, Bill and I took a break and finally had our honeymoon. We were in Hawaii for ten days and took a leisurely trip home by cruise ship. What a wonderful time and such pleasant memories. Five years later, in 1974, my husband had a massive coronary and died very suddenly at age 53. Two children were in college and four yet at home at the time of his death. I was appointed to the school board to finish the term to which he had just been re-elected. I was re-elected three times and served ten years. I went back to work as a secretary/receptionist at the Baptist retirement and nursing home for five years, worked at The Loft woman's clothing store, and then ran for Shelby County Treasurer, a position I held for 12 years. In 1983, the Harlan Chamber of Commerce honored me with a "Citizen of the Years" award and in 1991, I was named Iowa's "Mother of the Year." I grew and accomplished a lot over the years, but all the time I knew God was with me - I couldn't have done it alone. Certainly this is the black and white story of Betty Markham penned and recorded by herself in preparation for the end of her days. What she didn't disclose was that she was a magnificent momma, grandmother, great-grandmother, sister and friend. She passionately loved her family and survived several late in life infirmities just to remain the loving and doting matriarch who was so very much treasured by her family. Betty embraced family functions and reveled being surrounded by her children, grandchildren and great-grandchildren. She went out of her way to be kind to others, always generous with her hugs, warm welcoming smiles and sparkling eyes. Betty loved people and embraced opportunities to cultivate new relationships and celebrate old friends. Betty Markham lived life abundantly through faith, family, friends and community. Principles that make small town living a bit better for all. Elizabeth Marie (Betty) Markham died Monday, July 12, 2021, having attained the age of 99 years, two months, and 25 days, surrounded by family members at her home of several years, Elm Crest Assisted Living facility, Harlan, IA. She was preceded in death by her husband "Dr. Bill", parents, one daughter Cheryl Lee and several beloved in-laws. She is survived by nine children: Michelle (Steven) Mores, Harlan; William (Robin), Harrison, AK; Darley Jo (Steve) Adams, Clitherall, MN; Dr. Mark (Pat), Omaha, NE; Tim (Carolyn), Gonzales, TX; MaryBeth Markham Burrack, Harlan; Nancy (Jeff) Gress, Hancock, IA; Dr. Phil (Amy), Harlan, IA; Dr. Scott (Joan), Harlan, IA. And 26 grandchildren; Marc, Msgt. Kylan Retired, Katy, Mike, Jodi, Kerri, Molly, Kim, Emily, Danny, Matt, Beth, Jessica, Holly, Jon, Msgt. Joe, Dr. Claire, Jeff, Michaela, Alex, Andrew, Erin, Sam, Jared, Will and Sara, and 44 great-grandchildren and numerous nieces and nephews and a wealth of cherished friends. Other survivors include sisters: Helen Perrin, Omaha, NE; Jean Brogan, Norfolk, NE; and brother, Jim Gladson of Bella Vista, AK. Memorials may be made to St. Michael's Catholic Church and Shelby County Catholic School in Harlan.

Born in Omaha, NE on April 17, 1922, I was the first born of 4 children to Ambrose and Agnes McPharlin Gladson. My younger days were lived during the great depression, and though we lacked in some material things, we had an abundance of love... View Obituary & Service Information

The family of Elizabeth "Betty" Marie Markham created this Life Tributes page to make it easy to share your memories.

Send flowers to the Markham family.