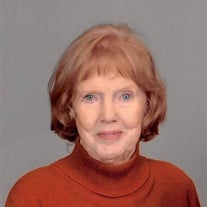 Eleanor Lorraine (Jones) Rosenquist was born October 19, 1931, to Myron and Lucille (Phelps) Jones. They lived on a family farm near Glenwood, Iowa. She was later joined by a brother Roger. She enjoyed the animals and gardening with her mother. After graduating Glenwood HS in 1949, she attended Immanuel Hospital Nursing program, graduating in 1952. There she met a classmate named Donna Rosenquist that introduced her to her brother Dale, whom she married in 1953. They had two children, Beth and Bruce and raised them in Iowa, Colorado, Nevada, and Oregon. Eleanor worked in many areas of nursing, including hospitals, doctors’ offices, surgery, and jailhouse nursing. Eleanor and her husband Dale loved traveling to many different countries. After Dale died in 2014 she moved to Omaha at Immanuel Village in 2015 and enjoyed many years attending events and meeting people that lived there, some from her hometown! She was a member of Vasa Order of America Omaha Lodge #330, and The Scottish Society of Nebraska and attended many Isaac Cummings Family Assoc. reunions for her Scottish side. She also enjoyed her P.E.O in Oregon and Omaha. She and her daughter traveled to Scotland to visit Cummings castles and then to Alaska since Eleanor had wanted to see that state. She enjoyed two wonderful 90th birthday parties in October. Eleanor passed away peacefully on Friday, April 22, 2022, attaining the age of 90 years, 6 months, and 3 days. She is preceded in death by her parents, brother Roger Jones and many sisters-in-law and brothers-in-law, and cousins. She is survived by daughter Beth Rosenquist (Omaha) son Bruce Rosenquist and wife Renee (Oregon) grandchildren Neil Rosenquist of Fort Bragg, California, and Emelia Rosenquist of Oregon and several nieces, nephews, cousins, and friends. Memorials can be given to Iowa State Myron C., Lucille C. And Roger M. Jones Scholarship Ames, Iowa 50011; Immanuel-Midland Nursing Alumni Assoc. At Midland Univ. 900 Clarkson St., Fremont, Nebraska, 68025; Bethel Lutheran Church 103 Clover St., Kiron, Iowa 51448; or Hillsdale Methodist Church 27068 Kimberling Ave, Glenwood, Iowa 51534

Eleanor Lorraine (Jones) Rosenquist was born October 19, 1931, to Myron and Lucille (Phelps) Jones. They lived on a family farm near Glenwood, Iowa. She was later joined by a brother Roger. She enjoyed the animals and gardening with her mother. After... View Obituary & Service Information

The family of Eleanor Lorraine Rosenquist created this Life Tributes page to make it easy to share your memories.

Send flowers to the Rosenquist family.