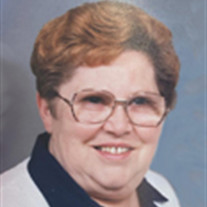 Elaine Magdeline (Thielen) Wendt , daughter of Ray & Adeline (Klein) Thielen was born April 23,1933 in Portsmouth, Iowa. She attended grade school and graduated from St. Mary’s in Portsmouth. She grew up on a farm just north of town until a tornado hit the home place and they moved to town. On February 25, 1952 Elaine was united in marriage to John “Buzz” Wendt at St. Mary's Catholic Church in Portsmouth, Iowa. They were the third couple to get married in the new church after the rebuilding from the tornado. Elaine was honored to be the first one to play the organ there. Buzz and Elaine resided in Portsmouth and eight children were born to this union: Susan, Lucy, John, Karen, Larry, Peg, Bev and Traci. Elaine's Aunt Cecilia Zimmerman’s cafe became her own and she was a proud owner of Elaine's Cafe in Portsmouth for many years; where people would say you could have a piece of the best pie around. Later, Elaine gave up the cafe to work for Peanuts at the Rocket Bar until her and her brother's started up a business of No Sweat Fitness Centers and Low Cal Cookie Company. Her business venture grew to four different locations over the years. Elaine retired and continued living with Buzz on the farm. They were blessed with 68 years of marriage together. They cherished big holiday gatherings and celebrations with their children and grandchildren. They made many memories traveling on vacations with family and friends. She died on Thursday, March 18, 2021 at Myrtue Medical Center in Harlan, Iowa, attaining the age of eighty-seven years, ten months and twenty-three days. In addition to her parents, she was preceded in death by her husband John “Buzz” and children Karen Burk, Susan Buck , Lucy Knauss, son in laws Pat Burk and Steve Buck, daughter-in-law Rhonda Wendt, grandchildren P.J Burk Adam Barta, Nick Wendt, Brad Knauss, great grandchildren Abby Buck and Georgia Berry, siblings Dolores Dotzler, Alvin Thielen, Nicholas Thielen, Monica Goeser, Doris Olsen, and Gene Thielen. She is survived by her children John & his wife Mary Ann (Koch) Wendt of Panama, Iowa, Larry & his wife Jeana (Knobel) Wendt of Ceresco, Nebraska, Peg & her husband Bob Barta of Salado Texas, Bev & her husband Rich Priestly of Salado Texas, Traci and her husband Trent Schuning of Portsmouth, Iowa; 18 grandchildren, 36 great grandchildren; siblings Agnes and her husband Paul Schulte of Carroll, Iowa; Ray and his wife Judy Thielen of Elkhorn, Nebraska; Gemma Finken of Olathe, Kansas; Shirley and her husband Bob Hanson of Omaha, Nebraska; Mary Maddox of Harlan, Iowa; Charles and his wife Lydia Thielen of Lincoln, Nebraska; nieces and nephews; other relatives and many friends.

Elaine Magdeline (Thielen) Wendt , daughter of Ray & Adeline (Klein) Thielen was born April 23,1933 in Portsmouth, Iowa. She attended grade school and graduated from St. Mary&#8217;s in Portsmouth. She grew up on a farm just north of town until... View Obituary & Service Information

The family of Elaine Magdeline Wendt created this Life Tributes page to make it easy to share your memories.

Send flowers to the Wendt family.