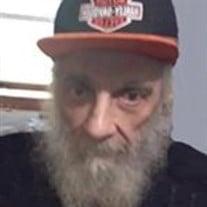 Edwin Jerald Newcomb son of Marie Domino and Edward Newcomb, was born on April 11, 1950 in Harlan, Iowa. He was baptized at St. Michael’s church. He went to the Catholic school and graduated from Harlan High School. The whole time he lived with his parents and siblings on a farm, with lots of land and horses, which was across from the Harlan High School, until his parents death which was within 2 years of each other and both being such young ages. Edwin the bought a house and lot in Kirkman Iowa. In 1985, Edwin had a baby girl, Tiffanie Newcomb. He raised her the whole time, and owned his own business. He painted, roofed and was one of the best carpenters around! He was a volunteer fire fighter. Edwin played guitar and was in a band with some of his buddies, and they played at local bars. He went to lots of auctions and sold antiques. He also breed and sold Doberman Pinchers and German Short Hair Pointers for hunters, which he also did a lot of himself. Anyone that knew Ed would say he loved riding his Harley’s. He rode them, built them and could fix anything on them. Ed could tell you what any tree was just by looking at it. He cut down trees, chopped them up for firewood and kept the house warm. Edwin survived 2 motorcycle accidents where he broke his neck each time, was in a coma and on life support and had over 20 different surgeries on different parts of his body throughout his life. He also had cancer. Edwin died peacefully November 23, 2021 at the Missouri Valley Nursing Home at the age of 71 years , 7 months and 12 days. He is survived by his sister Patrica Lambard and her family; his daughter Tiffanie and her 3 children, that he also loved with his whole heart and every breath he took; Anthonie Newcomb, Steve John Janak III and Envie Slauter. Edwin was preceded in death by his mother and father, his Uncle Pete, and his brothers Ronald and Jerald Newcomb, and his 14 year old dog friend, Destiny.

Edwin Jerald Newcomb son of Marie Domino and Edward Newcomb, was born on April 11, 1950 in Harlan, Iowa. He was baptized at St. Michael&#8217;s church. He went to the Catholic school and graduated from Harlan High School. The whole time... View Obituary & Service Information

The family of Edwin Jerald Newcomb created this Life Tributes page to make it easy to share your memories.

Send flowers to the Newcomb family.