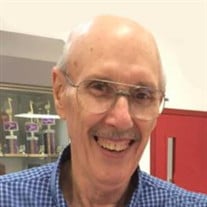 Edwin Robert Lippincott, son of Howard and Barbara (Derra) Lippincott, was born on November 30, 1943 in Hastings, Nebraska. He grew up in Blair, Nebraska and graduated from Blair High School with the class of 1961. He attended Wayne State college and was awarded a Bachelor’s of Arts and Education Degree in 1966. He was united into marriage on April 19, 1964 to Norma Jean Hansen in Blair, Nebraska. To this union two children were born: Timothy Scott and Gina Marie. Ed and Norma were both very involved and active in Peace United Church of Christ in Walnut, Iowa. Ed loved woodworking and handiwork and was often called upon by neighbors to do small carpentry projects around their house. He made several wooden toys, baby furniture for grandkids and many other sentimentals. Ed loved to bake and worked in a bakery in Blair throughout high school where he mastered the art of making a great cinnamon roll (which he never failed to provide at every single Christmas). He was a people person who had the gift of gab. Ed had a great sense of humor, had a hint of sarcasm and was never at a loss for words. He once reigned as Mayor of Walnut, and was very active in the community, from Jaycees to church to Peace Haven. Ed and his wife Norma owned a variety store in Walnut, Iowa for many years. He loved to read any genre of book, was a master at crossword puzzles and enjoyed a mean game of cards. His collection of "How To For Dummies" books was proof that he was a life-long learner. Ed was a warm-hearted and humble husband, father and grandfather who was always there to lend an ear, even if you had to repeat yourself for him to hear. His life revolved around his family, never missing a birthday or excuse for a gathering. He instilled the importance of hard work and family strength in everyone he touched. Ed was a strict, yet beloved teacher who dedicated his life not just to his own family but to generations of families in Walnut. He enjoyed directing plays and musicals at Walnut High School. He loved being outside, going for walks with grandkids to the park and playground and never missed a glimpse of the world outside. Ed will always be remembered by his kindness and mischievous smile, which was contagious to anyone around. His legacy of love will live on with all those whose lives he touched. On Thursday, March 26, 2020, Ed passed away at Bergan Mercy having attained the age of seventy-six years, three months and twenty-six days. He is preceded in death by his parents Howard and Barbara; and daughter Gina Marie. Left to cherish his memory are his wife of fifty-five years Norma Jean of Bellevue, Nebraska; children Timothy (Stephanie) Lippincott of Papillion, Nebraska; grandchildren Aleisha Lippincott of Johannesburg, South Africa; Brooks Ginn of West Des Moines, Iowa; Devin Ginn of Waukee, Iowa; Kylie Lippincott of Papillion, Nebraska; brother Roger Lippincott of Sierra Vista, Arizona; other family and many friends.

Edwin Robert Lippincott, son of Howard and Barbara (Derra) Lippincott, was born on November 30, 1943 in Hastings, Nebraska. He grew up in Blair, Nebraska and graduated from Blair High School with the class of 1961. He attended Wayne State... View Obituary & Service Information

The family of Edwin Robert Lippincott created this Life Tributes page to make it easy to share your memories.

Send flowers to the Lippincott family.