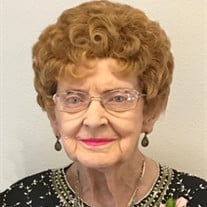 Edna Lucille (Nelson) Paulsen was born on October 27, 1921, to LeRoy and Edna E. (Jensen) Nelson at the family home located just north of Fiscus in Polk Township, Shelby County, Iowa. She was the fourth child born to this family. She died at Elm Crest Retirement Community on Sunday, February 2, 2020 at the age of 98 years, 3 months, and 6 days. She attended school through the eighth grade at the Polk School # 1 located one mile north and one mile west of the home place. Along with her family, Lucille was active in the Merrill's Grove Baptist Church. She was baptized on November 11, 1934, and was active in the youth group and in the various choirs of the church. On April 5, 1940, Lucille was married to Henry A. Paulsen at the Merrill's Grove Baptist Church followed by a reception at the Nelson family home. Three children were born to this union—Wayne Merrill, Reuben Ray, and Mary Kay. Lucille and Henry lived in Fiscus, then on the Raymond Merk farm near Audubon, then on the Nelson farm, then on a farm near Gray, then on the George Peterson farm southwest of Fiscus, and then on a farm east of Irwin. They moved into Harlan in 1978. She was a member of the First Baptist Church of Harlan. When the three children were out of high school, Lucille began to work outside the home—first at a cafe in Irwin and then as a Ward Clerk at the Myrtue Memorial Hospital in Harlan. She worked at the hospital for 28 years before retiring. She was an excellent cook—she made great pies of all kinds. She did needlework—smocking aprons, crocheting afgans and lap covers. For a number of years she baked and decorated anniversary and wedding cakes. She enjoyed playing the piano and the organ in her home. Lucille and Henry celebrated their 25th, 40th, 50th, and 60th wedding anniversaries with family and friends gathered for the festivities. They made several trips to Denmark to see Mary Kay and her family. Following Henry's death, Lucille made two trips to Denmark. When Henry died, Lucille continued to live in their home in Harlan until she moved into an apartment in the Elm Crest Retirement Community. Lucille was preceded in death by her parents; her husband; four siblings—Merle, Grace, Lloyd and Ruth and an infant sister. She is survived by two sons: Rev. Dr. Wayne (Julie) Paulsen of Wichita, KS and Reuben (JoAnn) Paulsen of Overland Park, KS; one daughter: Mary Kay (Rev. Kjeld) Grarup of Handbjerg, Denmark; six grandchildren: Lisa (Chuck) Knapp of Concordia, KS; Lori (Scott) Fast of Overland Park, KS; Terry (Tina) Paulsen of Springfield, VA; Jeff (Tiffany) Paulsen of Olathe, KS; Anna Marie (Jorgen) Lunding of Handbjerg, Denmark; and Mai-Lis (Torben) Grarup of Tune, Denmark; two step-granddaughters: Joni Shadonix and family of Overland Park, KS and Janise Thurston and family of Wichita, KS; nine great-grandchildren; and one brother, Everett Nelson of Audubon, IA; and other relatives and friends. In lieu of flowers please direct memorials to the Harold W. Kleinpaste Scholarship Fund of Elm Crest.

Edna Lucille (Nelson) Paulsen was born on October 27, 1921, to LeRoy and Edna E. (Jensen) Nelson at the family home located just north of Fiscus in Polk Township, Shelby County, Iowa. She was the fourth child born to this family. She died... View Obituary & Service Information

The family of Edna Lucille Paulsen created this Life Tributes page to make it easy to share your memories.

Send flowers to the Paulsen family.