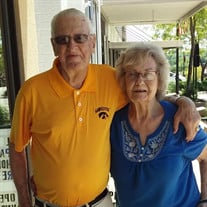 Earl Eugene Nutter, the son of Allen and Alice (Lewis) Nutter, was born on April 17, 1929 in Kalamazoo, Michigan. While he was growing up, Earl quit school and lied about his age so he could join the military. He joined the United States Marine Corps serving during the end of World War II and a few years after. Earl drove the “Big Wigs”, transporting generals from different locations and even President Richard Nixon, before he became president. He traveled while in the military, but ultimately Earl made it back to Kalamazoo where he became a Salesman after the war. He worked for many different businesses as a salesman, but the business that made him most happy was Mt. Ever Rest Cemetery in Kalamazoo where he sold grave spaces, crypts, and other similar things. He went to every service for the people who purchased cemetery merchandise from him. Joyce Pedersen, the daughter of Delos and Belva (Barnard) Smith, was born on April 26, 1934 in Kalamazoo, Michigan. She graduated high school in Kalamazoo and attended Western Michigan University. Following college, Joyce worked as a Taxpayer Service Representative (TSR) for the IRS. On May 29, 1957, Joyce and Earl united in marriage in Kalamazoo. Though their marriage didn’t last, and they moved on with other people after the fact, they knew that they were right for each other after some time apart. Joyce was in a car accident in the mid 1980's that caused her to retire early from her career and she eventually moved to Denison, Iowa to be closer to her daughter Colleen. Earl moved to Denison in 2016 for the same reason but to also be with Joyce. Both of them were kind of artsy, but in different ways. Earl liked to listen to big band music and Polka songs, which lead to his love of dancing and the love of some of his favorite artists, such as Glen Miller, Tommy Dorsey, and Sammy Davis Jr. Joyce had a passion for Gibson guitars and crafts such as painting, knitting, and sewing. Joyce liked dancing as well. They had a regular date going to the dance hall and moving their feet to whatever song was playing. Joyce passed away on June 18, 2018 at Eventide Lutheran Home at the age of 84. They were united again on November 18, 2019 when Earl passed away at Crawford County Memorial Hospital at the age of 90. Those left to cherish their memories are their children Jeannie Kasiorek and her husband Ron of Grand Rapids, Michigan; Colleen Pauley and her husband Tim of Denison; and Holly Flourney and her husband Vernon of Florida; Ten grandchildren and many great-grandchildren; Earl’s half-sister Paula Fiebiger and her husband Ted of Comstock, Michigan; Joyce’s sister Gerilyn Smith of Kentucky; and many nieces and nephews. They are preceded in death by Earl’s sons Earl Jr. and Mark Nutter; Earl’s brother Ken Nutter; and nine of Joyce’s siblings.

Earl Eugene Nutter, the son of Allen and Alice (Lewis) Nutter, was born on April 17, 1929 in Kalamazoo, Michigan. While he was growing up, Earl quit school and lied about his age so he could join the military. He joined the United States Marine... View Obituary & Service Information

The family of Earl Nutter and Joyce Pedersen created this Life Tributes page to make it easy to share your memories.