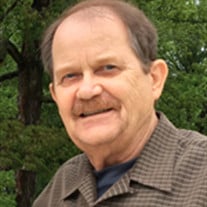 Duane Albert Finken, son of Victor and DeJoy (Ogden) Finken was born June 25, 1951 in Earling, Iowa. He attended St. Joseph’s Catholic school until the tenth grade then graduated from Harlan High School with the class of 1969. After graduation, he worked in Omaha, Nebraska before enlisting into the United States Navy, where he served in Guam. On July 7, 1971, Duane was united in marriage to Marti Coenen in Westphalia, Iowa. Two children were born to this union: Jason and Ryan. After his honorable discharge, Duane ran Finken’s Café in Earling for a few years. He then went to work at IBP in Denison, Iowa for about 10 years. He became an independent agent for Combined Insurance and Physicians Mutual Insurance. Duane retired in 2012 after working fourteen years at Panama Transfer as a dock supervisor. He loved being outdoors, golfing and fishing. He also enjoyed playing pool and cards, watching the History Channel and Westerns. He loved time spent with his family, especially enjoying family vacations to Utah to visit the Ogden Family and also to Florida and Texas. Duane died on Wednesday, August 4, 2021 at CHI Lakeside Hospital in Omaha, Nebraska, attaining the age of seventy years, one month and ten days. In addition to his parents, he was preceded in death by his infant daughter Erin, siblings Gerald Finken, Beverly Finken, and Patti Finken. He is survived by his wife Marti Finken of Earling, Iowa; children Jason (Becky) Finken of Harlan, Iowa; Ryan (Melinda) Finken of Elkhorn, Nebraska; grandchildren Noa, Chase, Evan and Kai Finken; siblings Judy Buckley of Earling, Iowa; Shirley Leonard of West Des Moines, Iowa; Kay (Dave) Kurcz of Papillion, Nebraska; Diane (James) Dunham of Conway, South Carolina; Ruth (Larry) Asbury of Pearcy, Arkansas; Debra (Richard) Hudkins of Cibolo, Texas; Audrey (Steve) Henscheid of Newton, Iowa; Keith (Judy) Finken of Defiance, Iowa; nieces and nephews; other family members and friends. *We had some technical errors while recording the services for Duane. We apologize that the services will not be able to watch at a later date on our website. - Pauley Jones Management

Duane Albert Finken, son of Victor and DeJoy (Ogden) Finken was born June 25, 1951 in Earling, Iowa. He attended St. Joseph&#8217;s Catholic school until the tenth grade then graduated from Harlan High School with the class of 1969. After... View Obituary & Service Information

The family of Duane Albert Finken created this Life Tributes page to make it easy to share your memories.

Send flowers to the Finken family.