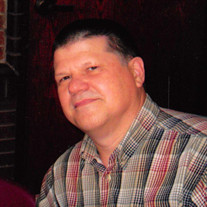 Douglas Francis Bryant, son of Wayne and Chyrl (McGee) Bryant, was born on March 2, 1957 in Missouri. He went to school in Avoca until the 4th grade and then the family moved to Oakland where he graduated from Oakland High School in 1975. Douglas went on to Iowa Western Community College for Civil Engineering. After college, he worked surveying in Nebraska. Doug married Claudia Rollins on November 12, 1976. At that time they lived in Council Bluffs, but moved to Avoca when the place of business that he was working at shut down. He then worked at the packing house in Oakland, and later worked at G&G Manufacturing in Omaha as a machinist, then Midwest Screw Products as a machinist in Omaha, Conductix Inc in Harlan and just recently with Sedrick Hartman in Omaha. Doug had several things that he loved but his dogs were on the top of his list. His dogs Clover, Ginger and Richie were truly one of his loves of life. He also loved watching TV and especially when watching a KS Chiefs football game, but he loved to read, loved Star Wars and anything science fiction. He enjoyed cooking and baking on weekends. Some of his specialties were stroganoff burgers, smoked ribs mostly, mac and cheese, beans and loved to bake sweets. He had been a Shriner and Mason, and also helped with the boys in Boy Scouts when they were younger. Douglas passed away on Thursday, December 17, 2020 attaining the age of sixty-three years, nine months, fifteen days. He was preceded in death by his parents Wayne and Chyrl (McGee) Bryant. Douglas is survived by his wife Claudia Bryant of Avoca, Iowa; his sons Caleb Bryant of Oakland, Iowa; Joshua (Leslie Parker) Bryant of Sioux Falls, South Dakota; and daughter Ella Bryant of Avoca, Iowa; two grandchildren Autumn Bryant and Grant Bryant; uncle John Bryant and his wife Karen of Council Bluffs, Iowa.

Douglas Francis Bryant, son of Wayne and Chyrl (McGee) Bryant, was born on March 2, 1957 in Missouri. He went to school in Avoca until the 4th grade and then the family moved to Oakland where he graduated from Oakland High School in 1975.... View Obituary & Service Information

No Services at this time

Send flowers to the Bryant family.