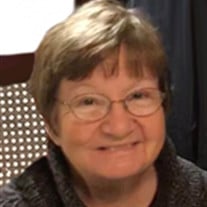 Dorothy Jean Strissel, the middle daughter of three girls, was born on January 29, 1947 in Denver, Colorado to Adam Henry and Pauline (Honstein) Lung. She was baptized and confirmed at Holy Shepherd Lutheran Church in Lakewood, Colorado. She attended school in Broomfield, Colorado and graduated from Broomfield High School with the class of 1965. During high school, Dorothy worked for Ed and Raeann Lampert taking care of their 3 children, who she always considered as family. After high school graduation, Dorothy went to work for The Smith Tool Company and Shell Oil. While on a double date with her sister Beth and husband Mike, Dorothy was introduced to Jerry Strissel who was attending graduate school at Iowa State with Mike. It was love at first site and after many letters, phone calls and only seeing each other six times in person, they were wed on July 8, 1972 at the United Church of Christ in Lakewood, CO. They established their home in Denison, Iowa. Dorothy adapted quickly from city to rural life, even walking beans for days without a complaining. Three daughters were born to the couple: Shannon Marie, Vicki Lynn and Jeri Renae. Dorothy was a loving wife, mom and grandma who was devoted to supporting her daughters and grandchildren during their school and summer activities. She never missed sending a birthday card to her friends and family and cherished her friendship with her sisters through the years. She loved to bake, cook "concoctions" and collect volumes of recipes to share. You could often see her working hard in the yard, then relaxing on the patio to enjoy time with her hubby and family at the end of a full day. She volunteered whenever she could at school and church activities through the year. She, was a member of Zion Lutheran Church in Denison, Iowa and Immanuel Lutheran Church when they moved to Harlan in 1982, an active member of PEO, served as a 4-H leader and was involved with the Shelby County Extension Services. Dorothy had an amazing commitment to participate fully in all aspects of her life, carrying out responsibilities with diligence and never failing to have concern and empathy for others. Dorothy had an unrelenting work ethic that she has passed on to her daughters. She enjoyed taking school pictures for many years while working at Noble Photography. Dorothy took the most pride in working alongside Jerry and wonderful friends at JFS Associates, LTD since 2005 as the Senior Office Manager, with many laughs as she taught her husband the art of file management versus pile management. Dorothy died on March 23, 2019 surrounded by her family at Myrtue Medical Center in Harlan, Iowa having attained the age seventy-two years, one month and twenty-three days. In addition to her parents, Dorothy was preceded in death by her sister Beth Ann Turner, her daughter's fiancé Dan Montgomery and her granddaughter Payson Nadine. She is survived by her husband Jerry Strissel of Harlan, Iowa; her daughters: Shannon and her husband Aaron Smith of Chisago City, Minnesota; Vicki Strissel of Harlan and Jeri Boyer with Don Barnett of Phoenix, Arizona; thirteen grandchildren; her sister Deborah Peters of Centennial, Colorado; nieces and nephews; other relatives and many friends.

Dorothy Jean Strissel, the middle daughter of three girls, was born on January 29, 1947 in Denver, Colorado to Adam Henry and Pauline (Honstein) Lung. She was baptized and confirmed at Holy Shepherd Lutheran Church in Lakewood, Colorado. She... View Obituary & Service Information

The family of Dorothy Jean Strissel created this Life Tributes page to make it easy to share your memories.

Dorothy Jean Strissel, the middle daughter of three girls, was...

Send flowers to the Strissel family.