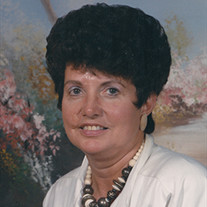 Dorothy Rae Elias Busch was born on March 10, 1936 in Magnolia, Iowa to Howard and Charlotte (Herman) Holben. She went to be with the Lord on July 6, 2021 surrounded by family. Dorothy was the 4th of 8 children. She attended Magnolia Elementary School in Magnolia, Iowa and graduated from Logan High School in Logan, Iowa with the Class of 1953. Upon graduation Dorothy worked at Council Bluffs Savings Bank in Council Bluffs, Iowa. On February 6, 1955, Dorothy was united in marriage to Larry Elias at Zion Lutheran Church in Logan, Iowa. After their marriage they lived in Council Bluffs, Iowa for a short time before moving to Larry's hometown of Persia, Iowa. Larry and Dorothy had four children: Larry Craig, Mark, Kim, and a baby girl who went to be with Jesus shortly after birth. Dorothy was active at their home church, Trinity Lutheran Church, in Persia, Iowa where she was the church organist for many years. She was active in Trinity's Ladies Aid and was selected as delegate to the Lutheran Women's Missionary League national conventions held in Washington, D.C., and Houston. In addition to helping her husband, Larry, in their store, Elias Super Market, Dorothy also worked at Home Savings Bank in Persia, Iowa starting as a teller and eventually becoming vice president before retiring in 1990. Dorothy had a wonderful gift for hospitality and enjoyed hosting 'huge' gatherings of family and friends at their home in Persia. She also enjoyed working with her many flowers and plants, both indoors and outdoors. Dorothy also spent time with her sisters making homemade jams, pies and baking a variety of Christmas cookies and fudge for the celebration of Christmas. But most of all Dorothy was a devoted mother, grandmother, sister, and friend. After Larry's passing in April 1989 Dorothy remarried on August 11, 1990 to Clarence 'Sonny' Busch. They resided in Persia, Iowa enjoying time with family, friends and traveling in their camper. In addition to her parents and her husband, Larry, and baby daughter, Dorothy was preceded in death by her brother, Les and sister, Shirley. Survivors include her husband, Clarence 'Sonny', her children: Larry Craig and his wife, Deb of Lincoln, Nebraska, Mark and his wife, Julie of Cedar Rapids, Iowa and Kim and her husband, Harry Shaw of Brentwood, Tennessee; 12 grandchildren and 8 great-grandchildren; brother and sisters: Idamae and her husband, Tom Fake of Denison, Iowa, Karolyn Weed of Chicago, Illinois, Jeanie and her husband, Marlyn Netsch of Bennington, Nebraska; Ronnie Holben of Kansas, Dona and her husband, Tom Emswiler of Logan, Iowa; other relatives and many friends. Family suggests memorials be made to Mission Central in Mapleton, IA or Generations Hospice Care in Missouri Valley, IA.

Dorothy Rae Elias Busch was born on March 10, 1936 in Magnolia, Iowa to Howard and Charlotte (Herman) Holben. She went to be with the Lord on July 6, 2021 surrounded by family. Dorothy was the 4th of 8 children. She attended Magnolia Elementary... View Obituary & Service Information

The family of Dorothy Rae Elias Busch created this Life Tributes page to make it easy to share your memories.