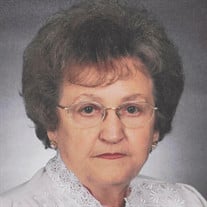 Dorothy Joan Alff was born on December 22, 1932, on a farm by Neola, Iowa to John and Marian Osborn. Dorothy was baptized and confirmed at the English Lutheran Church in Avoca, Iowa. She attended first grade in Shelby, Iowa until March 1st when they moved to Avoca. She finished first grade in Avoca and graduated from Avoca High School in 1950. She worked as a secretary with the Brandes & True Insurance office until she got married. Dorothy met her husband, Lester Alff, at a dance in Avoca, Iowa. However, marriage was not to be until Lester was able to rent some farmland. They were then married at the English Lutheran Church in Avoca, Iowa. Two children were born to this union: Marcia and Douglas. Dorothy was the first woman in the neighborhood to farm beside her husband. She had her own tractor and equipment. Also, for a few years there was no running water or any other conveniences in the house. It was so exciting to get water and a bathroom in that old farm house that she eventually lived in for fifty-two years, before she and her husband built a new home in Avoca. The other convenience she was to get was an automatic washer. Mr. Glen Braden, who owned a shop in Walnut, Iowa, came out to say he had a good used washer and he wanted Dorothy to have it as he knew no other woman that deserved it more at that time. Dorothy’s mother requested she and Lester build a house in 2001 big enough to entertain her four children and her grandchildren and great-grandchildren every Christmas and that is what they did. Dorothy passed away on Saturday, August 10, 2019 attaining the age of eighty-six years, seven months and nineteen days. She was preceded in death by her husband Lester; parents John and Marian Osborn; brother Jack Osborn; sister-in-law Lois Osborn; brother-in-law Frank Jones. Left to cherish her memory are her daughter Dr. Marcia Alff of Sun City West, Arizona; son Douglas (Eileen) Alff of Walnut, Iowa; granddaughters Tina (Jeremy) Fincher and Tonya (Jeff) Feekes; five great-grandchildren; sisters Darlene Jones of Atlantic, Iowa; Jane (Lynn) Hansen of Anita, Iowa; sister-in-law Valora Osborn of Walnut, Iowa; many nieces and nephews; other family and many friends.

Dorothy Joan Alff was born on December 22, 1932, on a farm by Neola, Iowa to John and Marian Osborn. Dorothy was baptized and confirmed at the English Lutheran Church in Avoca, Iowa. She attended first grade in Shelby, Iowa until March 1st... View Obituary & Service Information

The family of Dorothy Joan Alff created this Life Tributes page to make it easy to share your memories.

Send flowers to the Alff family.