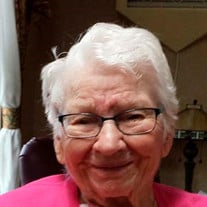 Doris “Jeanie” Mertz returned to her heavenly home January 30, 2020. Her loving husband, Laverne, was by her side. She was a resident of Avoca Specialty Care in Avoca, Iowa. Jeanie was the youngest of seven children born to Charles and Amanda (Hochuli) Schneider on September 4, 1923 in Anaheim, California. Her father died when she was only 18 months old, leaving her mother to raise and care for the children. Jeanie loved to tell the stories of how she and her siblings helped their mother care for their orange groves which provided the resources for the family. She always said she got her strength from her mother as she took on the role of sole parent, provider and nurturer of her Christian faith. Jeanie attended Lincoln Elementary, Fremont Junior High and Anaheim High schools. She graduated from Woodbury College in Los Angeles, California, earning her degree in Fine Arts. On August 31, 1946, Jeanie married Clifford Beckler in Anaheim, California and three children were born to this marriage. Jeanie and Clifford moved to Masonville, Colorado during their retirement years, spending 55 years of marriage together before Clifford died in 2001. Jeanie married Laverne Mertz on December 7, 2001, in Estes Park, Colorado. She and Laverne shared 19 years of love, memories and many travels, always coming back to their home in Estes Park. While living in Estes Park, Jeanie was a member of the Kiwanis Club of Estes Park and a volunteer at the Estes Park Senior Center. Due to health concerns, they moved to Walnut, Iowa in 2017 to live at sea level and be near to Laverne’s family. Jeanie is survived by her husband, Laverne, of Avoca, Iowa and his wonderful family; her son, Ron (Michele) Beckler, of Santa Ana, California; her daughter, Susan (Jerry) Pelis of La Salle, Colorado; six grandchildren; and six great-grandchildren. She was preceded in death by her parents, siblings, her daughter, Nancy and her husband, Clifford. A very special thank you is given to all the wonderful and caring staff at Avoca Specialty Care who provided Jeanie with love, respect and dignity in her final years. It was a great comfort to her loved ones. In her memory, may we go to the one true source of comfort and peace….the Holy Word of God……..John 3:16 "For God so loved the world, that he gave his only begotten Son, that whosoever believeth in him should not perish, but have everlasting life."

Doris &#8220;Jeanie&#8221; Mertz returned to her heavenly home January 30, 2020. Her loving husband, Laverne, was by her side. She was a resident of Avoca Specialty Care in Avoca, Iowa. Jeanie was the youngest of seven children born to Charles... View Obituary & Service Information

The family of Doris "Jeanie" Mertz created this Life Tributes page to make it easy to share your memories.

Send flowers to the Mertz family.