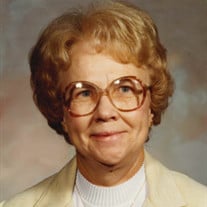 Donnabelle, daughter of Almor Ray and Grace Helen (Lenz) Skinner, was born August 7, 1921, in Logan, Iowa. Given the pet nickname Dolly by her father, probably because she was petite and looked like a doll, most relatives still call her by this name rather than Donnabelle. Growing up on a farm helped shape her values, and she often shared stories about life "on the Willow," a creek that ran through the northeast corner of the family's farm. She was involved with 4-H and MYF as well as a variety of school activities. Graduating in 1939 from Magnolia High School, she then attended Simpson College in Indianola, Iowa. There she earned a two-year elementary teaching degree. In 1962 she earned her four-year Bachelor's degree from Drake University. On May 25, 1943, she married long-time sweetheart Pvt. Edward Glen John in the Bellville, Illinois, Methodist Church. The wedding had to be postponed from an earlier date as the Army was called to stack sandbags against the flooding Mississippi River. After Edward received his honorable discharge in 1946, they moved several times within Iowa as well as to Missouri. In 1952 their daughter Deborah Ann was born in Chillicothe, Missouri. In 1953 Harlan became the family's permanent home where Edward worked at and eventually owned Larson's Shoe Store. Donnabelle was part of a family tradition of teachers including her mother, two aunts, and her daughter. Her own teaching career spanned over 40 years. During World War II, she taught in Emerson and Missouri Valley, and for a few years after the war's end, she taught at Harlan's Old Park School. Other positions included Lincoln Township School #6 during the final years of one-room country schools in Iowa, Laurel Elementary, and West Ridge Elementary. However, her career was distinguished neither by the number of years nor by the different schools but by her dedication to the profession and her influence upon her students. Even today former students share personal stories and comment, "Mrs. John changed my life." In 1983 the Harlan Chamber of Commerce named her Teacher of the Year, the first time this award was given. She retired from teaching in the spring of 1985. Baptized in the Methodist Church when a baby, she remained an active member of the Methodist community throughout her life as a Sunday school teacher, United Methodist Women member, and Circle leader. In addition, she served as president of Friday Club which later became the Harlan Study Club. Gardening, canning, pickling, sewing and completing several types of needlework often filled her free time. However, collecting Native American artifacts was always her strongest interest. Many of pieces in her extensive collection were purchased throughout the Midwestern states, often during family vacations. But she also enjoyed searching the fields of her parents' farms in Missouri and the timber area of her aunt and uncle's farm in Harrison County Iowa. Donnabelle is survived by her daughter, nieces, nephews, and in-laws. In lieu of flowers, the family requests that donations be made to the Harlan Methodist Church or the Harlan Community Library. Funeral service will be broadcasted live on the home page, and posted at a later date.

Donnabelle, daughter of Almor Ray and Grace Helen (Lenz) Skinner, was born August 7, 1921, in Logan, Iowa. Given the pet nickname Dolly by her father, probably because she was petite and looked like a doll, most relatives still call her by... View Obituary & Service Information

The family of Donnabelle John created this Life Tributes page to make it easy to share your memories.

Send flowers to the John family.