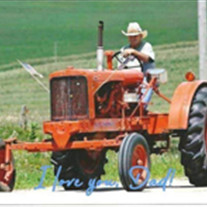 Donald Lee Robinson Donald Lee Robinson, son of Archie and Ethel (Huey) Robinson, was born February 25, 1944 in Sioux City, Iowa. He attended school at Irwin - Kirkman High School. On October 5, 1964, Donald was united in marriage to Gladys Harris at the Harlan Church of Christ. Three children were born to this union; Stacey, Kelly and Angela. Donald was a lifetime member of the Church of Christ and had been an elder at Redline church. After school Donald went to work for his father at Robinson Implement for many years. He also worked with Howard Dahlof, Boeck International, Harlan Auto Mart with his brother Lloyd and Tom’s Agri Diesel before retiring. Donald worked at Puck Enterprises out of Manning after retirement. Donald enjoyed helping friends and neighbors at harvest time. He had many hobbies. He liked restoring cars and tractors, hunting, drag racing, fishing, the Nishnabotna Tractor Club, Greenridge Steam and Gas Antique Show, and the remote control airplanes that he built and flew. Donald passed away on May 23, 2021 at Myrtue Medical Center in Harlan, attaining the age of 77 years, 2 months and 28 days. He was preceded in death by his wife Gladys, his parents and brother Lloyd. He has left to cherish his memory, his children Stacey (Todd) Kelley of Harlan, IA; Kelly Robinson of Irwin, Iowa and Angela Schwarte of Dubuque, Iowa: 6 grandchildren; 4 great-grandchildren; sister Jean Borcher of Irwin, Iowa; nieces and nephews; other family members and friends.

The family of Donald Robinson created this Life Tributes page to make it easy to share your memories.

Send flowers to the Robinson family.