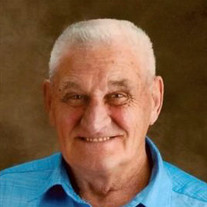 Donald Eugene Pattee was born on September 1st, 1933 to William and Alma (Rock) Pattee, southeast of Hancock, IA on the Rock ranch. Don attended country school southeast of Hancock, before moving southwest of Avoca. He finished country school there, before attending high school in Avoca. He graduated with the class of 1951. While in high school, Don participated in football, basketball and track. After high school, Don entered the army to serve his country. Following his military service, he returned to the Avoca area and worked for Piittmann Seed. Don spent the rest of his adult life farming southwest of Avoca, where he raised corn, soybeans, oats, hay, cattle and hogs. In 1959, Don met Carol Becker at Sokol Hall in Omaha, at a dance. They fell in love and married in August of 1960. They started their life together on the farm where Don’s parents had lived. Here they raised their four children: Gary, Lori, Wendy and Steve. Following retirement in 2001, Don and Carol moved to Avoca. Don was an active member in Trinity Lutheran Church, serving many positions throughout the years. He was also a member of the Avoca American Legion. Don served on the AvoHa school board, as well as the East Pottawattamie County Fair Board. He served in many capacities for his community. Don loved playing cards, dancing, and a good story over coffee, at the Mini Mart. But the most important thing to Don, was his family. He deeply loved his wife, children, grandchildren and great-grandchildren. On Wednesday, September 8th, 2021, Don went to join our Lord in Heaven having attained the age of eighty-eight years and 7 days. He was preceded in death by his loving wife, Carol, his parents, his siblings, Laverne, Edward, Arlene, William (Swede), Wallace, and grandson Bryce Albright. Don is survived by his children Gary (Janet) Pattee, Lori (Mitch) Rew, Wendy (Chris) Dierking, and Steve (Nicole) Pattee, grandchildren Ross Pattee, Tricia (Nathan) Stouder, Reed (Becky) Pattee, Michelle (Jeremy) Fritz, Caitlin Albright, Sam (fiance Anna) Rew, Megan Pattee, Sylvia Dierking, Katie Pattee, and Andrew Dierking, great-grandchildren, Annabelle, Ben, Braelyn, Star, Jameson and Briar, brother Lawrence (Lavina) Pattee, sisters-in-law, Norma Pattee, Shirley Pattee, Linda (Denny) Thomson, brother-in-law Dave (Dori) Brich, and many other relatives and friends. *Please make sure to read the above statement from the family before attending visitation and funeral service. Thank you!

The family has expressed the use of masks as a requirement to attend the visitation or the funeral service.

Donald Eugene Pattee was born on September 1st, 1933 to William...

Send flowers to the Pattee family.