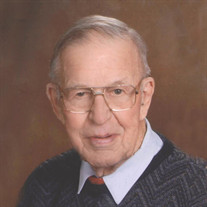 Donald James Lundergard (Don) was born May 22, 1928 at Logan, Iowa to Carrie (Jessen) Lundergard and James Sorensen Lundergard. He graduated from Missouri Valley, Iowa High School in 1945 and farmed with his mother and brothers on their farm outside of Logan and did various jobs until being drafted into the United States Army in 1951. He served as a military policeman until 1953 as part of the US Occupation Forces in Berlin, Germany. Upon his return he worked at, then purchased the Conoco gas station on Highway 30 in Missouri Valley. He married Betty Lundeen on April 17, 1955. They had two daughters Luanne and Donna. While living in Missouri Valley, Don was an active community member serving on the Missouri Valley Volunteer Fire and Rescue Squad and on the Missouri Valley City Council. In 1964 he took a job with the Iowa Highway Commission as a traffic weight officer and the family moved to Atlantic, Iowa. He was transferred to Avoca in 1967 when the interstate scales were being constructed and continued to work for the Iowa DOT until his retirement in 1991. In August of 1979, while working for the DOT, Don found 10,400 lbs of marijuana in bales on a semi trailer in the westbound scale on I-80 between Walnut and Avoca. It was estimated to be worth between 4 and 5 million dollars at that time. After his retirement , Don continued to be an active community member. He managed the food pantry in Avoca for several years, served on the East Pottawattamie County Fair Board, and was an active member of Fred Funston Post 227 of the American Legion in Avoca. He served on the Legion Scholarship Committee, Honor Guard, and helped with the bookkeeping and operations of the Legion's bingo games. He was also a 50 year member of the Masonic Valley Lodge in Missouri Valley. He and Betty were active members of Trinity Lutheran Church in Avoca. They enjoyed traveling and caring for their grandchildren. They traveled to Pelican Rapids, Minnesota to fish with his brother Robert and his family for many summers. Don was an avid vegetable and flower gardener and enjoyed collecting toy tractors and coins. He had a big raspberry patch, loved iris flowers, and continued to work on cars and household projects. Don passed away on Tuesday, June 2, 2020 at Avoca Specialty Care nursing facility in Avoca, Iowa at age 92. He was preceded in death by his father James, mother Carrie, brothers Robert and Clifford Lundergard, and infant great grandson Paul Leon Peters. His is survived by his wife of 65 years Betty, daughters Luanne of Omaha, Nebraska, Donna (Ron) Peters of Tennant, Iowa, grandsons Eric Peters (Jessica) of Omaha, Ne, Lee Peters (Melissa) of Lincoln, Ne, and granddaughter Cari Peters Wingert (Zach) of Panama, Ia, and great-grandchildren Ethan and Janna Peters, Tyler Peters, and Adeline Wingert. He is also survived by his sister Mary Ann (Ken) Kocour of Fort Dodge, Ia, sister-in-law Marlene Lundergard of Logan, Ia, and sister and brother-in-law Carolyn and Jerry Krajeski of Omaha, Ne, many nieces and nephews, friends, and other relatives. Memorials can be directed to the Trinity Lutheran Church Food Bank and Fred Funston Post No. 227 - Avoca, Iowa.

Donald James Lundergard (Don) was born May 22, 1928 at Logan, Iowa to Carrie (Jessen) Lundergard and James Sorensen Lundergard. He graduated from Missouri Valley, Iowa High School in 1945 and farmed with his mother and brothers on their farm... View Obituary & Service Information

The family of Donald Lundergard created this Life Tributes page to make it easy to share your memories.

Send flowers to the Lundergard family.