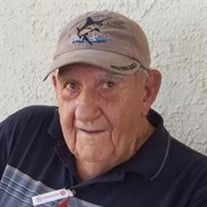 Donald Joseph Keane was born on January 25, 1934 to Thomas and Matilda (Maiwald) Keane in Panama, Iowa. He was baptized and confirmed at St. Mary's Catholic Church where he remained a life-long member. On March 2, 1954, Don was united in marriage to Irmine Mahlberg at St. Mary's in Panama. They became parents to nine children: Jim, Peg, Cindy, Mary Lou, Joe, Larry, Lisa, Janet, and Mark. After their marriage, they continued to work on the family farm outside of Panama. Don was homegrown, always appreciating the treasures of Panama life. He cared deeply for his town, serving as a member of the Knights of Columbus, the Panama Volunteer Fire Department, athletic association, and 4-H Club. Don loved playing basketball, baseball, and always cheered for the L.A. Dodgers and Creighton Blue Jays. But more importantly, Don knew how to bring family and friends together, whether it was at a nut fry, over a bowl of his famous homemade ice cream, or just in a simple conversation around his kitchen table on Fedler Street. Everyone was always greeted with a smile by Don; he was a man of integrity, preferred to lead by example, and found the good in everyone. He gave unconditional love to his children and grandchildren, showing them the importance of honest work and laughter with a twinkle in his eye. He taught the meaning of respect, kindness, and friendship through his daily actions and commitment to his life-long love and wife, Irmine. Don died on Thursday, May 28, 2020; having attained the age of eighty-six years, four months and three days. He was preceded in death by his parents; his wife, Irmine; and his children Mary Lou Keane, Mark Keane, and Lisa Keane Schartz. He is survived by his children; Jim (Jean) Keane of Panama, IA; Peg (Mike) Hawkins of Omaha, NE; Cindy (Randy) Hodapp of Littleton, CO; Joseph (Betty) Keane of Defiance, IA; Larry Keane of Panama, IA, and Janet (John) Henscheid of Westphalia, IA; daughter in law, Kelly Fox of Harlan, IA; son in law, Robert Schartz of Omaha, NE; 49 and counting grandchildren and great grandchildren; and his wonderful dog, Cuddles.

Donald Joseph Keane was born on January 25, 1934 to Thomas and Matilda (Maiwald) Keane in Panama, Iowa. He was baptized and confirmed at St. Mary's Catholic Church where he remained a life-long member. On March 2, 1954, Don was united in marriage... View Obituary & Service Information

The family of Donald J. Keane created this Life Tributes page to make it easy to share your memories.

Send flowers to the Keane family.