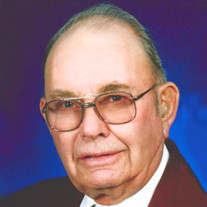 Donald Dale Hansen, 92, passed away peacefully, July 8, 2021, at Peace Haven Retirement. Home. He was born March 30, 1929 in Harlan Iowa, the son of Henry and Elvina (Christiansen) Hansen. Don attended elementary school in Monroe Township and graduated in 1946 from Walnut Community School. After graduation, he attended a 3 month program in Denison and received his teaching certificate. Then he met the love of his life, Luella Madden, at a polka dance at the Old German Hall. Dancing became a weekly part of their lives for many years. They were married November 10, 1949 at the First Congregational Church in Avoca. Don taught school for a year, became employed by the City of Avoca and then owned the Y Station in Avoca for a year. The rest of his life was spent doing what he loved, farming. He worked for a few farmers in the area before settling on the Hansen Family Farm where he farmed the majority of his life. Years of farming different crops, laying hens, milking cows, and farrowing pigs. Not always easy but, he continually worked other jobs to provide for his family, most known for his years of custom baling for many farmers in the area. Don was a steadfast member of Peace United Church of Christ, being on the original committee to build the current church and serving on several committees for over 55 years. Don loved baseball; playing it, teaching it to his kids and grandkids, and watching it. He was the left fielder for the Jacksonville baseball team in the Iowa Western league, catching the ball with his right hand, taking his glove off and throwing the ball with his right hand. Don was also involved with FFA receiving farmer of the year award. Don retired from farming at the age of 87 and moved to Peace Haven in 2019. Luella passed away February 3, 2020 after being married for 71 years. In addition to his parents, he was preceded in death by his brothers: Harold Hansen, Norman Hansen; sisters Henrietta Greve, Ardelle Anderson, Lavina Weiss; grandson Billy Hicks. Surviving are sons; Donald and wife Loleta (Kixmiller) of Walnut, Iowa; Allen and wife Bev (Trekamp) of Ainsworth, Nebraska; Daryl of Atlantic, Iowa; Rick and wife Cheryl (Skokan) of Elkhart, Kansas; and daughter Lori of Lemon Cove, California; eleven Grandchildren: Michelle Tooley, Brent Hansen, Darrin Hansen, Chris Hansen, Wendy Buhrman, Scott Hansen, Juanita McCoy, Amy Scott, Andrew Whyte, Ally De Groot, and Emily Whyte; twenty-two Great Grandchildren: Kaitlyn, Preston, Kamryn, Korie, Brady, Sierra, Skyler, Kash, Dhillon, Jacob, Spencer, Shelbie, Jillian, Mabrie, Carl, Christopher, Faith, Payton, Caiden, Chandler, Cutler and Trace; his brother Merle Hansen of Brayton, Iowa; other family and many friends. Don's steadfast love and loyalty to God, family and friends was undeniable. Never walking away when things were difficult, always proving you can do anything if you put your mind to it. He was one of our greatest blessings, this man we called our Uncle, Brother, Great Grandpa, Grandpa, and Dad.

The family of Donald Dale Hansen created this Life Tributes page to make it easy to share your memories.

Send flowers to the Hansen family.