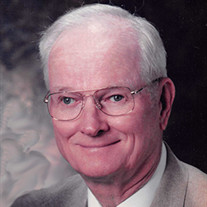 Donald James Dahlof, 94, died Sunday, March 20, in Harlan, IA at Elm Crest Senior Living Community. He was born to James Earl and Ella Petersen Dahlof on Sept. 20, 1927, on the family farm in Polk Township, Shelby County, joining brother, Howard, and sister, Arlene. Donald attended country school at Polk No. 4 and graduated from Kirkman High School in 1945. Donald, along with his father and brother, farmed until they went into the trucking business in 1948. That same year, his parents and sister moved to Harlan. Donald continued to live on the home farm with his brother until the U.S. Army drafted Donald to serve his country. His service from 1950-52 included time in Korea where he made good friends and lifelong memories (e.g., “the mohawk haircut” story). In 2013, Donald was honored to be among the Korean Vets on a Freedom Flight to Washington, D.C. Upon returning home from his time in Korea, Donald found time outside farming and trucking activity to tour the Shelby County roads on a Harley-Davidson motorcycle he treasured. Eventually, he set aside that adventure in favor of pursuing his interest in flying, earning his pilot’s license in 1955. For years, Donald was as at home in the pilot’s seat of his single-engine Cessna as he was behind the wheel of a semi-trailer or the combine he used to harvest crops. In 1959, Donald married Marilyn Virginia Schrader of Prescott, Iowa. The couple made the homestead farm their residence. They were blessed with three children, and the family was active in the Redline Church of Christ where Donald served as an elder. Donald and Marilyn enjoyed traveling, especially with the Shelby County Commander’s Group. His family knew his love for winning Mexican train dominos games, attending races at the Shelby County Speedway, shooting fireworks with his grandchildren, and regaling them with stories about his mischief-making – especially a memorable flight into Mexican air space. For eight decades, he contributed to his community by farming, and providing custom harvesting and trucking services. He practiced soil conservation and served as a director for the Longbranch Watershed. He was a certified seed dealer. During his life, Donald belonged to the 8-Ball Aviation Club of Harlan, the Iowa Corn Growers Association, the Southwest Iowa Farm Business Association, and the American Soybean Association. His survivors include his wife of 62 years, Marilyn; three children, Tamara Wishard (Kevin) of Austin, TX; Todd Dahlof of Overland Park, KS; and Trudy Gormley (Paul) of Marion, IA; three granddaughters, Alexa Gormley of Ames, IA; Lauren Wishard of Austin, TX and Jaclyn Wishard of Malibu, CA; and other relatives and friends. He was preceded in death by his parents, siblings and grandson, Grant Wishard. In lieu of flowers, memorials may be made to 8-Ball Aviation Club of Harlan or the Arbor Day Foundation. Burial will be a private family burial.

The family of Donald J. Dahlof created this Life Tributes page to make it easy to share your memories.

Send flowers to the Dahlof family.