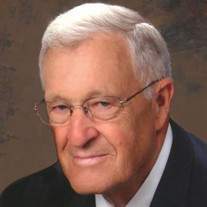 Donald Buman was born on April 22, 1929 in the farm home built by his father Will Buman near Tennant IA. He grew up in this house and later raised his own family there. He attended the Tennant Consolidated Schools and graduated from high school in 1946. Donald went right to work on the family farm with his father. His father died unexpectedly in 1952 and Don assumed responsibility for managing the farm. Don met Clarice Lapke in 1952 while she was in nursing school at Mercy Hospital in Council Bluffs. He decided that she was the love of his life and courted her through her senior year. Clarice accepted his proposal in July 1953, and they were married on August 31, 1954. They had a memorable honeymoon to Bermuda before returning to the farm to begin married life together. Don was primarily a farmer and cattle feeder but during his long life, he had many "occupations" in his farm business: accountant, investor, engineer, mechanic, weatherman, botanist, builder, master welder, a skilled cement mason, an expert in animal husbandry, and an operator of heavy farm equipment and machinery. Dad also had exceptionally good gambling instincts in his profession. Don was a member of the Shelby County Cattlemen's Association and served a term as president. He was named Cattleman of the Year in 1966. He enjoyed attending cattle sales and taking buying trips to Nebraska, South Dakota, Wyoming, and Missouri to fill his feedlots. Don served on the Myrtue Memorial Hospital Foundation Board and was affiliated with the Knights of Columbus. He was a lifelong member of St. Michaels Catholic Church and served on the Parish Council. Over the years he made major contributions to the development of and improvement to the grounds of St. Michael's. He also contributed to other community projects, usually by driving his tractor with the front-end loader into town. Don really enjoyed moving dirt and running cement. He greatly valued hard work and had a generous, giving heart. Don was a loving husband, father, grandfather, and great grandfather. He and Clarice raised five children on the farm. He has two daughters-in-law, two sons-in-law, 14 grandchildren and seven great grandchildren. Don was a good friend to so many and well respected in his community. In retirement years, Don and Clarice spent winters in Florida and Arizona. He took up golf in later years and loved watching sports, the stock market, the Price is Right and Wheel of Fortune on television. He lived a long and busy life. We will miss you-husband, father, grandfather, great-grandfather, and friend. We are happy that you are now peaceful. Time to rest. He is survived by his wife Clarice Buman of Harlan, Iowa; children Jane (Jim) Van De Velde of Villa Park, Illinois; Kathy (Mark) Kleinschmidt of Saint Paul, Minnesota; David (Nancy) Buman of Council Bluffs, Iowa; Brenda Buman of Harlan; Mark (Lisa) Buman of Harlan; his grandchildren, other relatives and friends. Condolences can be sent to Clarice Buman, 1109 Elm Street Apt# 201 Harlan, Iowa 51537

Donald Buman was born on April 22, 1929 in the farm home built by his father Will Buman near Tennant IA. He grew up in this house and later raised his own family there. He attended the Tennant Consolidated Schools and graduated from high school... View Obituary & Service Information

The family of Donald Buman created this Life Tributes page to make it easy to share your memories.

Send flowers to the Buman family.