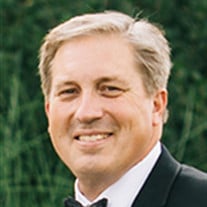 Dr. Don Klitgaard, MD, FAAFP Donald Richard Klitgaard, son of Richard and Mary (Petersen) Klitgaard, was born May 27, 1968, in Harlan, Iowa. Don was the youngest of four children. He was baptized in Prairie Rose Lake on August 28, 2005, alongside his daughter, Ellen. He attended Harlan Community Schools, graduating as valedictorian from Harlan High School in 1986. Some of Don’s high school activities included playing trombone in the band, 4-H, Methodist Youth Fellowship, track, and football. Don is remembered locally for his 63-yard fumble recovery and touchdown that led to the 1984 Harlan Cyclone football state championship. He also sang in Faith Sound, where he met his high school sweetheart, Laurel Sue Gambs. On July 2, 1988, Don and Laurel married at the First United Methodist Church in Harlan. Don earned his Bachelor’s degree from Iowa State University in 1990, majoring in zoology. In 1996, and in 1999 he earned his M.D. from the University of Iowa College of Medicine, and he completed his residency in the Lincoln Family Practice Residency Program in Lincoln, Nebraska where he worked with the University of Nebraska Huskers football team. Following residency, Don returned to Harlan and practiced full-scope Family Medicine for 15 years, serving as Medical Director of the Myrtue Medical Center clinics in Harlan. During this time, he served as the physician champion for the TransforMED National Demonstration Project and led their subsequent Patient-Centered Medical Home transformation efforts. Dr. Klitgaard served as President and Board Chair of the Iowa Academy of Family Physicians (IAFP), President of the IAFP Foundation, and as a member of the AMA Committee of Innovators. He was also actively involved in the American Academy of Family Physicians (AAFP), the Interstate Postgraduate Medical Association, the Iowa Medical Society, and the Iowa Healthcare Collaborative. Don was awarded the AAFP’s Boundary Breakers award in 2021. Beginning in 2012, Dr. Klitgaard was dedicated to the creation and growth of Heartland Rural Physician Alliance, a statewide independent physician association that helps practices in Iowa thrive in the world of value-based purchasing and healthcare delivery transformation, topics on which Dr. Klitgaard was a nationally-recognized expert. In May 2015, Dr. Klitgaard created and served as CEO of MedLink Advantage, a healthcare consulting and Accountable Care Organization (ACO) management company. Dr. Klitgaard served as Chief Medical Officer for Ascent Physician Leadership and as Director of Leadership Strategy for the Interstate Postgraduate Medical Association (IPMA). Don invested in the local community in many ways. He served First Baptist Church as a deacon, a youth group leader, and a mission trip leader. Despite a busy work schedule, he always made time to be deeply involved in his children’s lives and activities. He was the proud father of two children, Ellen Elizabeth and Andrew Jack, his son-in-law J.W. Whitehorn, and the loving grandfather of one grandchild, Esther Rose. He volunteered as an AYSO soccer coach for 12 years, a Destination Imagination coach, and Cyclone Track Club coach. Don became tremendously involved in the Boy Scouts of America as an adult. He followed his son Jack through the program and transformed the local troop when he became Scoutmaster. He led the troop to many adventures at Camp Cedars, canoeing 160 miles down the Missouri River, backpacking at Ben Delatour Scout Ranch in Colorado, snow camping at Tomahawk Scout Reservation in Wisconsin, and backpacking at Philmont Scout Ranch in New Mexico. He was also the scoutmaster for a contingent to the National Jamboree in 2017. 16 scouts earned their Eagle rank under his leadership, and he taught numerous merit badge classes and Wilderness First Aid. Don also volunteered as a physician at multiple Scout camps. Don was awarded the District Award of Merit by the Ohwahnassee District in 2020. An avid fisherman and outdoorsman, Don enjoyed hunting pheasants and waterfowl, hiking, camping, and fishing near and far. Don enjoyed taking the fishing boat out on Prairie Rose lake, deep sea fishing and surfcasting in Florida, and trying to hook Walleye and Northern Pike in Northern Minnesota and at Lake Sasa-Ginni-Gak in Canada. Don’s hobbies included woodworking, photography, gardening, collecting coins, and playing board games and card games with his family. He traveled extensively and particularly enjoyed doing so with his wife and children. Favorite destinations were Disneyland and Walt Disney World, where he engaged in another favorite hobby, pin trading. Most importantly, Don cherished his family and loved God above all else. His patients and friends remember him as a patient, kind, helpful, cheerful, intelligent, hard-working, servant-hearted man of God. After a difficult 16-month battle with colon cancer, Don passed away on Monday, November 8, 2021, surrounded by his family. He had reached the age of 53 years, 5 months, and 12 days. Don was preceded in death by his parents and his sister Barb Schwery. He is survived by his wife Laurel of Harlan, IA; children Ellen (J.W.) Whitehorn of St. Louis, MO & Andrew “Jack” of Harlan, IA; granddaughter Esther Whitehorn; siblings Steve (Carolue) Klitgaard of Pocatello, ID; Jane (Larry) Buck of Lime Springs, Iowa; brother-in-law Joel Schwery of Lenexa, KS; brother-in-law Nick (Jane) Gambs of Dunlap, IA; sister-in-law Barbara (Terry) Light of Hawthorne, CA; mother & father-in-law Ed & Eleanor Gambs of Logan, IA; nieces, nephews, other family members, and many friends.

Dr. Don Klitgaard, MD, FAAFP Donald Richard Klitgaard, son of Richard and Mary (Petersen) Klitgaard, was born May 27, 1968, in Harlan, Iowa. Don was the youngest of four children. He was baptized in Prairie Rose Lake on August 28, 2005, alongside... View Obituary & Service Information

The family of Dr. Don Klitgaard created this Life Tributes page to make it easy to share your memories.

Send flowers to the Klitgaard family.