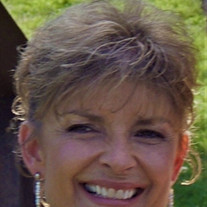 Diana (Diane) Lynn Garrison, age 63, of Ashland, NE, died October 8, 2020 at her home with her husband and family by her side. Diane married the love of her life, Tom Garrison on August 9th, 2008. Her dad affectionately gave her the nick name "Joke" or Jokey as this was his nickname in the service. Diane's passion was teaching, no matter what job she had but her true calling was becoming a teacher. Diane had a great zest for life and family, especially her Goddaughter, Ashley and Godson, Wyatt. Diane thoroughly enjoyed all the things that came with family celebrations and had all the decorations to make it festive for everyone. Diane lived life by her own terms and died the same way. Diane had a few passages that got her thru her worst days, and she wrote this one down. "Fear not for I am with you, be not dismayed for I am your God. I will strengthen you. I will help you. I will uphold with my righteous right hand." Diane was preceded in death by her father, Michael, maternal and paternal grandparents and her sister Theresa, her father-in-law Richard and mother-in-law Ann. She is survived by her husband Tom, and children, sons Jeremy Garrison and his wife Laura of Neola, IA, Ryan Garrison and his wife Amanda of Elkhorn, NE, daughters Stefany and her husband Ryan Johnson of Greenwood, NE, Lindsey and her husband Jay Walling of Fremont, NE, grandchildren Gage, Natalie, Josie, Gabe, Keira, Levi, Keeleigh, Klairissa, Raidyn, Rodrick, Roarke, and Sarai, her mother Theresa Blum of Harlan, IA; her brothers Bob Blum and wife Nancy of Malvern, IA, Mike Blum and his wife Cindy of Harlan, IA, Tom Blum and his wife Becky of Grimes, IA, Rick Blum and his wife Michele of Beatrice, NE, Dave Blum and his wife Chris of Glenwood, IA, her sister Julie Anderson and her husband Larry of Red Oak, nieces and nephews, Ashley and David, Peyton, Hayli and Nash, Steven and Shelby, Hoyt, Shelby and Raphael, Grayson, Megan and Austin, Dylan, Madison, Cooper, Wyatt, Makenna, Emily and AJ, Andrew and Ryan, brother-in-laws Dick Garrison of Washougal, WA, Steve Garrison and his wife Mary of Tucson, AZ, Mike Garrison of Lewiston, ME, Pat Garrison of Harlan, IA and sister-in-laws Kim and her husband Craig Martin of Tucson, AZ, Susie and her husband Bob Baillargeon of Lewiston, ME and many many aunts, uncles, cousins, friends, students and coworkers.

Diana (Diane) Lynn Garrison, age 63, of Ashland, NE, died October 8, 2020 at her home with her husband and family by her side. Diane married the love of her life, Tom Garrison on August 9th, 2008. Her dad affectionately gave her the nick name... View Obituary & Service Information

The family of Diane Lynn Garrison created this Life Tributes page to make it easy to share your memories.

Send flowers to the Garrison family.