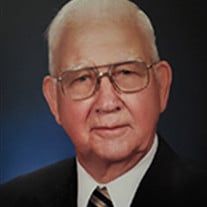 Dewey James Linden, son of Oscar and Edith (McKeighan) Linden was born July 10, 1930, in Rural Harlan, Iowa. He was the last of 10 children. About the age of 9, he realized he was a sinner and accepted Christ as his Savior. He attended and graduated from Tennant High School in 1948. After high school, he went for 1 year to Dana College and then helped his brother Douglas farm outside of Portsmouth. He served in the US Marines from 1952-54 during the Korean War. After returning from the service, on April 16, 1954, Dewey was united in marriage to Dorothy Thomson at the Calvary Baptist Church in Walnut, Iowa. Four children were born to this union: Gale, Byron, Jody, and Janet. Having "dried out" of farming in 1955-56, Dewey entered the University of Iowa, completing a BA in Science Education in 1959. He earned an MA in Science from Arizona State University in 1963. He taught science in three schools in Iowa: Marion (1959-67), Southeast Polk (1967-69), and Elk Horn-Kimballton (1969-92). He retired from teaching at Elk Horn-Kimballton school in 1992. Following this, he did craft/woodworking and also worked with his son, Gale, as an electrician's helper for many years. Dewey enjoyed many things in this life. He commonly taught Sunday School at Calvary Baptist Church; was apt in many mechanical skills; and assisted his children in many home projects. Dewey died on Monday, December 20, 2021, with his family by his side at Peace Haven Retirement Home in Walnut, Iowa, attaining the age of ninety-one years, five months, and ten days. In addition to his parents, he was preceded in death by his wife Dorothy, siblings Darrell Linden, David Linden, Dana Linden, Dallas Linden, Duane Linden, Douglas Linden, Esther Linden, Helen Hirschkorn, and Wilma McClure. He is survived by his children Gale Linden and his wife Alice of Kimballton, Iowa; Byron Linden and his wife Janet of Moville, Iowa; Jody and her husband Dave Jones of Edgerton, Kansas; Janet and her husband Phil Graves of Bovill, Idaho; 21 grandchildren; 72 great grandchildren; 7 great-great grandchildren; sisters-in-law, Ellen Linden and Betty Thomson; brother-in-law, Howell McClure; nieces and nephews; other family members and many friends.

Dewey James Linden, son of Oscar and Edith (McKeighan) Linden was born July 10, 1930, in Rural Harlan, Iowa. He was the last of 10 children. About the age of 9, he realized he was a sinner and accepted Christ as his Savior. He attended and... View Obituary & Service Information

The family of Dewey Linden created this Life Tributes page to make it easy to share your memories.

Send flowers to the Linden family.