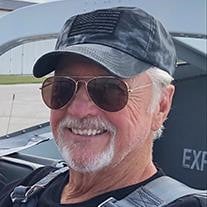 Derald Leon Graybill was born on October 12, 1945 to Wilbur and Vera (Edwards) Graybill on the family farm Southeast of Tennant. He was baptized and confirmed at the Tennant Methodist Church and then transferred to the Shelby United Methodist Church. He attended Tennant School until the completion of 8th grade where he then attended Shelby Consolidated and graduated with the class of 1963. After graduation he attended Clarinda Community College for 1 year. On February 4, 1966, Derald enlisted in the United States Army. During this time, he served a year in Vietnam. On September 16, 1967 he was united into marriage to Bette Zolk at the Shelby Presbyterian Church. They made their home in Hephzibah, Georgia for six months while Derald finished the army. After their return to Shelby, they purchased a farm 2 miles north of Shelby. Together they farmed for 39 years raising cattle, hogs, corn and soybeans. Together they had two daughters. He was a 47 year member of the Shelby Legion Post 240, and served on the Shelby Community School District Board of Directors from 1982-1991. In 1986 he was presented with the Farm Citizen Community Service Award. In 1998, Derald received the Region 5 Iowa Soil Conservation Award. For 18 years he was a member of the 8 ball aviation club. Together they worked the flight breakfast for many years. Derald was always a driven, goal-oriented person. In the early 1990’s, Derald started studying for his private pilot’s license and obtained it in 1993. He then purchased 32004, the “Other Woman,” in his life. Together they made flights to Louisiana, Chicago, and the Lake of the Ozarks. Alone or with his son in law, Chris, Derald flew to Oshkosh, WI, for the EAA AirVenture. His goal while farming was to be able to retire when he was 60. In 2006, he achieved that goal. Although it was a difficult transition for Bet, Derald’s next goal was a Harley. This new love took them to Arkansas, Missouri, Colorado, Wyoming, Montana, Beartooth Highway, Wisconsin, and Sturgis. To celebrate their 50th Wedding Anniversary, they were gone 12 days to do the circle tour around Lake Superior. His next goal was to build his own airplane. After two and a half years, he was able to accomplish it. After thousands of rivets, 12435 was born, an unbelievable accomplishment. He was very proud of this goal. For four years, they spent the month of January at Bonita Springs, Florida. Each grandchild was able to come and spend a week and make memories. Derald enjoyed attending his children and grandchildrens activities. Anyone who knew him knows he had an opinion and wasn’t afraid to express it. He did not care what others thought of him and sometimes had an attitude. If you were his friend, you were lucky. Derald received his heavenly wings on Thursday, July 1, 2021 at his home having attained the age of 75 years, 8 months and 19 days. He was preceded in death by his parents; brother Wayne, sister Joyce, Mother-In-Law Marcella Jones, and Father-In-Law George Jones. He is survived by his loving bride of 53 years Bette Graybill of Shelby, Iowa; daughters Nikki Cohrs of Omaha, Nebraska; Krista (Chris) Austin of Papillion, Nebraska; grandchildren Alivia, Addison and Asher Austin; sister Norma Gahm of Council Bluffs, Iowa; Sister-In-Law Marsha Hursey, Nephews Rodney Graybill and Dave Hursey, and Niece Shaunda Smith, other family and many friends. Fly high, Derald. You will be missed.

Derald Leon Graybill was born on October 12, 1945 to Wilbur and Vera (Edwards) Graybill on the family farm Southeast of Tennant. He was baptized and confirmed at the Tennant Methodist Church and then transferred to the Shelby United Methodist... View Obituary & Service Information

The family of Derald Graybill created this Life Tributes page to make it easy to share your memories.

Send flowers to the Graybill family.